“As a waterman myself, I grew up admiring and being inspired by many of the great watermen legends of Laguna. I feel incredibly blessed to be given this opportunity to share my artistic talent in a way that recognizes some of these legends, and at the same time, gives back to the community I love.” –Randy Morgan, local sculptor and waterman. 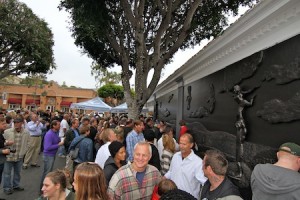 Between last Thursday and this past Tuesday, Laguna Beach demonstrated how a community can get things done without requiring government intervention.

Aside from the fantastic waves on Friday and Saturday, the best part of my week was the unveiling of the Waterman’s Wall at the Hobie Surf Shop downtown.

A lot of people came together to make the Waterman’s Wall work. Local Randy Morgan had the talent and vision to create a mural of Laguna watermen for Lagunans to enjoy. Clay and Delphine Berryhill organized the private financing and much of the project management while Mark Christy donated the space, a blank wall on the Beach Street side of Hobie Surf Shop.

The mural is a selection of lifeguards, surfers, skimboarders, stand up paddlers, and filmmakers who have contributed both to the wall and to Laguna. In a town with as rich a history as ours, you can’t perfectly capture everyone, but you can keep making more art.

A surprisingly large number of people came out to see the wall unveiled. Beach Street was shut down for an hour or so with the crowd. Everyone was there to celebrate two traits that make Laguna special; people who regularly get their gills wet and local art.

It turned out beautifully. The celebration at Mozambique afterwards was packed with a cross section of local friends and families.

I was less excited about Tuesday night at the City Council chambers and another round of overreach by a city leaning more toward a nanny state than a city of adventurers who manage risks and challenges in the sea.

Kelly Boyd, our new mayor, captured the evening best when he voted against a Social Host Ordinance (SHO) that he had voted for on Nov. 13 despite revisions that made radical improvements.

“I’ve noticed that we keep passing more things that don’t work. I’ve come to the conclusion, unless you show me that it’s going to really work, I’m not going to pass it,” said Boyd.

Recently, the city of Laguna Beach felt like it had become a local government out-of-control.

The Wednesday before Thanksgiving, councilman-elect Steve Dicterow set up a meeting between Howard Hills, Tijana Hamilton and myself with City Manager Robert Pietig. The room was a little tense, but cordial. I have to admit that simply having real dialog with clear expectations helped create a process with strong engagement on both sides.

Before that, the “process” simply felt like a series of meetings designed so that the city could talk at the opposition.

Last Thursday, as a lot of the town was celebrating the Waterman’s Wall and the uniqueness of our community, the city unveiled their updated language in the social host ordinance based largely on the suggestions of Hills and the opposition group, which had dramatic improvements to previous versions.

At the council meeting this week, seat were filled with high school students and parents who came down to present their research and opinions about SHOs around the country and why Laguna’s was a bad idea.

Teague Hamilton, a Laguna Beach High School senior who will be attending University of Santa Barbara on a tennis scholarship, requested that the city stop confronting kids and find ways to both incentivize good behavior as well as make kids feel welcome in their own town.

The council voted 3 to 2 for the SHO with Boyd and Dicterow courageously opposing it.

Progress in community means helping each other find ways to agree and move forward when we are in opposition. The SHO isn’t perfect, but I felt like everyone in the room won last Tuesday. That works.

Local resident David Vanderveen is a parent and entrepreneur.