By Daniella Walsh, Special to the Independent 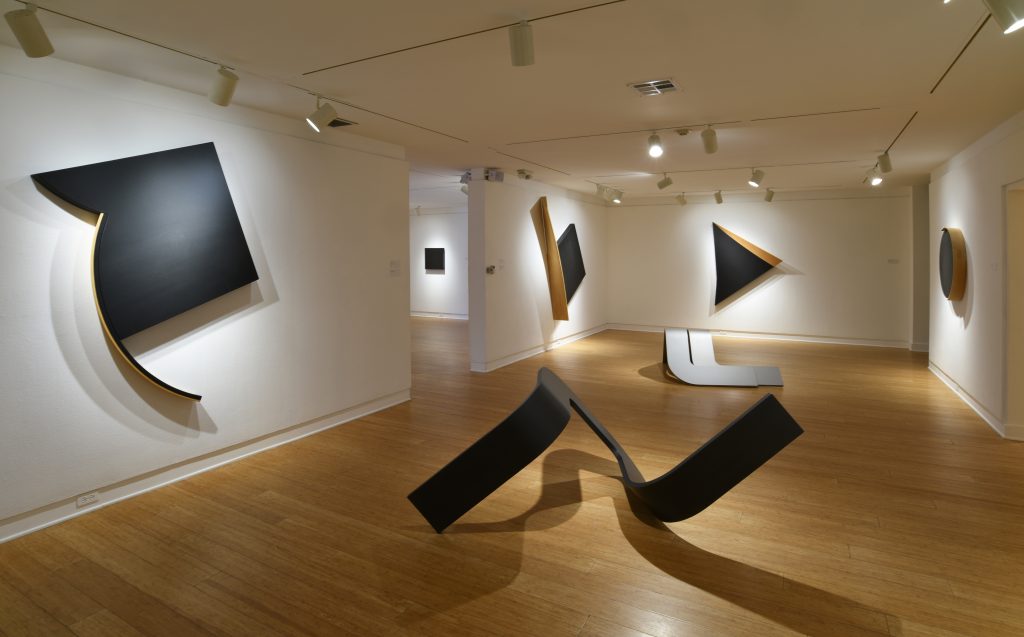 Tony DeLap has been making art for at least 70 of his 90 years, and now the best of his lifetime oeuvre has been gathered into “ Tony DeLap: A Retrospective” by the Laguna Art Museum.

The exhibition is comprised of roughly 80 paintings, three-dimensional works and drawings, curated by Peter Frank, an associate editor of Fabrik art magazine and veteran art critic.

Accompanied by a catalogue worthy of acquisition, it is a stunner, deftly timed to honor DeLap’s ninth decade of creativity and, perhaps coincidentally, the museum’s 100th anniversary.

DeLap began his career in the early 1960s in the Bay Area as an art and design instructor at the California College of Arts and Crafts. There he made “Throw” and “The Wall” in 1961 and “Medieval Flower” in 1962, multi-media pieces emblematic of the innovative spirit pervading the West Coast art scene. Intriguingly, he began “Gherkin” at the same time, a hard-edged work that vaguely hints at what was to come later. The title derives from a gallerist’s remark likening the piece, showing green circles bracketed in white and framed by a black hourglass shape, to a jar of canned pickles.

He moved south to Newport Beach in 1965 after he was invited to join the founding art faculty of the fine arts department at UC Irvine.

Beginning in the 1970s, DeLap turned the entire concept of what comprises painting upside down and sideways. He carved and constructed canvases into sweeping shapes with edges appearing and disappearing. Colors are monochromatic, mostly blues, shades of gray and black or occasionally bright red or pure white with no perceivable evidence of brushwork. Yet they are luminous, straddling lines between painting and sculpture, with mini-canvases mounted within larger ones and framed in blond shades of wood. “Maga” 1974 is a stunning example of such construction within a construction. The piece recalls a theater stage topped by a proscenium arch and flanked by steps on each side.

For DeLap, it’s always about the edge, putting the canvas into a three-dimensional realm, as seen in “Pseudo Psychometry (1979) and “Shamus” (2004). In an interview with film maker Dale Schierholt, DeLap called the famed edges “hyperbolic,” created by a straight line that is cut and shaped at crucial points exposing armature or if covered in canvas giving it a three-dimensional appearance. DeLap also said that he considers the relationship between a painting and the wall symbiotic, hence the shadow and emphasized that he never felt comfortable with the term “minimalism.” I want to complicate things, to compete, in a sense, with my ideas,” he said.

Irreverence for icons and convention is exemplified by a 1991 depiction of the Eiffel Tower dissected by an orange square and colorful freestanding sculptures such as “Mabel at the Wheel” and “Tango Tangles III,” both done in 1966.  The latter were part of a series of free-standing sculptures that DeLap created from shapes that he, once finished, seemingly cut at random into their final form. It’s a process of discovery that he said pervades most of his work.       “Modern Times,” 1966, exemplifies the process even more by tricking viewers’ eyes into following a shadow line that suddenly appears infinite.

DeLap’s drawings, some independent, others illustrating how a given painting or sculpture came into being are worthy of a separate visit since they hold one’s attention as much as the major works. They suggest that DeLap might have become a formidable architect. Indeed, he studied architecture, design and model making for a time at Claremont, and the Los Angeles area houses by Frank Lloyd Wright count among his early inspirations.

He also said that making model airplanes was a boyhood preoccupation, and in later years some pieces vaguely recall the shape of aircraft wings (“Mister Mirical,” 2014, “Razzler,” 1998, “Shamus,” 2004).

Pervasive throughout is DeLap the magician. His interest in magic as a child is well known. It’s explicit in his famed installation “The Floating Lady,” done between 1974 and ’78 and standing before the Orange County Museum of Art. A maquette of the piece is accompanied here by “Double Floating Lady,” 1974 and a “Floating Lady Portfolio,” consisting of lithographs and other illustrations.  He has used his magic cards and card tricks as inspiration in 1977 watercolor paintings (“Card Fan I&V”) whose circular forms recall the upside down shuffling of a magician’s cards. “You can’t have magic if you don’t have something to hide,” he says. Hence we might conclude that the line between art and magic, sleight of hand one might say, is hard to detect here.

The exhibition runs through May 28.