For a quarter of a century, Collector’s Choice, the Laguna College of Art and Design’s yearly fundraising event, has been shoehorned into the school’s back parking lot, jam-packed with supporters ready to eat, drink, be merry and buy art to support future generations of young artists.

In its 26th year, the event’s popularity outgrew the main campus, said LCAD’s president Jonathan Burke. “Last year, we had to turn people away and this year looked for a new venue that would reflect the quality of the college,” he said.

Taking the great leap forward, Collector’s Choice, chaired by LCAD trustee Nelson Coates and co-chaired by arts activist Laura Rohl, booked into the roomier ambience of the Montage resort for the annual soiree, taking place Friday, Sept. 25, from 5:30 to 9:30 p.m.

Burke also cited weather as inspiration for the shift. “The canyon can get cold at night and when the event was still held in June, the clouds could open up. I have been to every Collector’s Choice, but I remember one year it was so cold that we draped blankets over chairs for people to use,” he recalled. 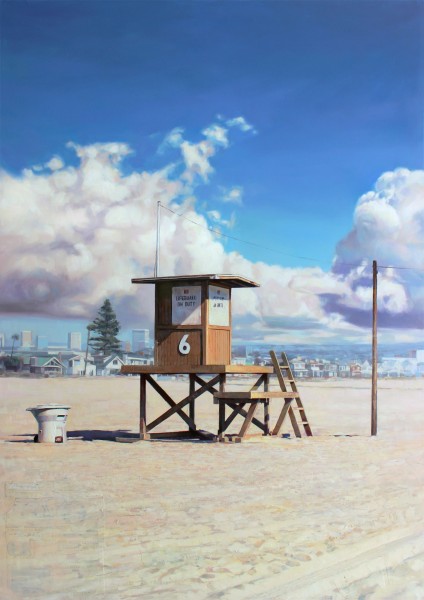 With success come changes. Ticket prices are up this year from $250 to $350, and art donations increasingly coming from prominent artists like Richard McDonald, who received an honorary doctorate from LCAD last year and is donating the sculpture “Blind Faith.” Plein-air icon Ken Auster is donating the landscape painting “Rip Tide,” Burke is offering the beachscape “Breaking News,” but a 2009 LCAD grad, Jason Kowalski, donated a work that graces the cover of this year’s invitation.

Altogether, artists donated more than 100 works for the silent and live auction. Artists may donate 100 percent of their work’s proceeds to the college or divide the proceeds as they wish.

Now, for the first time, works have been selected by a jury of three gallerists, Niccolo Brooker, director of the Forum Gallery in Los Angeles; Elena Del Rio, proprietor of the Koplin Del Rio Gallery in Culver City; and Sue Greenwood, owner of Sue Greenwood Fine Art in Laguna Beach. The two Los Angeles galleries focus on representational art and have previous relationships with LCAD, said Burke.

Greenwood praised the jurying process as one that refines the picks for the auction, making it more cohesive and focused. “The selected works marry nicely with the vision of the school’s fine art painting program. I call the jurying process the ‘cherry picks,’ the best of the best picked for auction, similar to how an art dealer picks works to take to an art fair,” she wrote via email.

There is slight dissent. Photographer Tom Lamb donated three works, but only “Jamboree” was accepted. “I found the language of rejection not very diplomatic and am not sure of a digital selection process,” he remarked, adding that he is nonetheless happy to contribute to the college and its future generations of students.

Art can be previewed at the school’s satellite gallery, 374 Ocean Ave., and on the main campus in the conference room, Tuesday through Saturday, 11 a.m. to 5 p.m. through Sept. 23. An open to the public reception for the artists will be held at the Ocean Avenue galley Thursday, Sept. 17 from 6-8 p.m.

Celebrating his 35-year association with LCAD, including the past four as its president, Burke noted that proceeds from Collector’s Choice has raised more than $1 million for student programs and scholarships since its inception.

“During the last 26 years, I have had the privilege of watching Collector’s Choice grow from a handful of dedicated friends to an extended family of hundreds of artists, educators, art collectors and alumni gathering to support new generations