A jam-packed candidate forum in Newport Beach shed light on the field of eight Democratic hopefuls looking to oust the 48th District incumbent, Dana Rohrabacher, who silenced speculation about his future intentions this week.

“I am unequivocally running for re-election,” Rohrabacher said in a statement posted Wednesday, Jan. 10, on his campaign website. “I’ve never run away from a fight over things I believe and I’m not about to start now.”

Earlier in the week, two other prominent Republican congressmen, Darrell Issa of Vista and Ed Royce of Fullerton, announced they would not seek re-election in 2018.

“Two down, two to go!” Annie Wright, president of the Aliso Niguel Democratic Club and the forum sponsor, said to the cheers of over 700 people who filled the tent at Newport Dunes. “We are going to flip Orange County!”

The fourth Orange County congressional district in play is represented by Mimi Walters, a Republican from Laguna Beach. With the departure of two GOP incumbents, the Cook Political Report wrote that voters will likely “lean Democratic” in the November election.

The forum proved that the candidates vying to represent the Democratic party on the November ballot agree on most issues aside from a goal of unseating Rohrabacher, whose district spans the coastline from Seal Beach to Laguna Niguel.. They also pledged to support the June primary victor.

Affordable healthcare was championed by the candidates, many of whom proposed a single-payer, universal coverage system.

“It is preposterous to think that we can afford to go to war and spend billions of dollars, but cannot provide healthcare for our own citizens,” said Omar Siddiqui of Costa Mesa. He outlined support for preventative care, regulation of drug prices, and rewarding patients for healthy lifestyles.

Laguna Beach candidate Micahel Kotick stressed the urgency of healthcare, noting congressional debate suggesting as many as 32 million people could lose coverage. “That’s like filling up Angel Stadium 700 times, that’s how urgent this is. We need to stop playing politics with people’s health. We need to get more healthcare to more people.”

He said more accountability should be placed on pharmaceutical companies as contributors to the opioid addiction crisis. “This is a national emergency, and we need to act now,” he said.

The candidates were united in their support for renewable, clean energy and the creation of green jobs.

Rachel Payne, of Aliso Viejo, said Orange County residents are vulnerable to climate change. “Climate change is real and it’s now,” she said. “And the people who suffer from fires and flash floods are climate refugees. It’s happening.”

If elected, Kotick said his first priority would be to halt new drilling along the California coast. “One thing is for sure: we see the GOP’s reckless environmental policy on full display — one that will impact generations of Americans if it remains unchecked,” he wrote in an email.

The candidates favor tougher gun laws and standing up to the National Rifle Association. “I think we should go to Google to design a background check that is fast and accurate,” said former Marine and gun owner Tony Zarkades of Huntington Beach.

He blamed Democrats’ failure to win gun control legislation on misguided efforts. “You want to see a face that could be the face of gun control? Look at this face. An ex-Marine. I’ve been shooting guns all my life. I speak their language. They’ll trust me,” he said to perhaps the largest cheer of the evening.

Siddiqui, a son of immigrant parents, spoke passionately about immigration and creating a new Deferred Action for Childhood Arrivals bill that includes a path to citizenship. He quoted Dr. Martin Luther King as well.

“We may have all come on different ships, but we are all in the same boat now,” he said.

In addition to the eight Democratic candidates, three other candidates, a Republican, a libertarian, and an independent are also in the race.

“At each event, the front runners have only ever talked about three people: President Trump, Dana Rohrabacher and themselves. They never talk about you, the voter, the middle class or any real actionable agenda and legislative solutions,” said independent Kevin Kensinger, also of Aliso Viejo.

Paul Martin, of Costa Mesa, and one of two confirmed Republican challengers, also was critical.

“All eight Democrats in this race offer the same failed platform of bigger government through raising taxes on the middle class. If Republicans want to keep this District 48, Dana Rohrabacher is not the answer; they will need to choose a candidate who is moderate,” Martin said via email.

Kim McDaniel, of Laguna Niguel, who attended the forum, came away energized. “I felt a lot of unity in the room,” said the volunteer for Harley Rouda, of Laguna Beach. She said she will remain a Rouda supporter, citing his active participation in demonstrations in the last year. “He shows up.”

“Lots of hopeful people gathered tonight, hopeful that together we will turn Orange County blue,” she said. 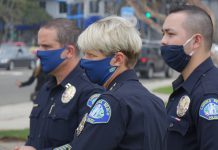