“I laugh every day with my students. When you tap into the joy that students bring, every day is special.”

Jason Fritze’s words embody the upbeat attitude he brings to his Spanish classes. Now in his 10th year with the district, Fritze radiates happiness at El Morro and Top of the World Elementary.

On Aug. 28, Fritze’s positive impact was recognized by the Laguna Beach Unified School District, as Superintendent Jason Viloria presented him with the 2018 Spirit of Laguna Award.

Fritze teaches Spanish to all fourth- and fifth-grade students in the district. He also leads afterschool language classes for first, second and third graders. In total, he works with more than 400 LBUSD youngsters each school year.

Because Fritze teaches so many children, he can only meet with them once a week. He said this limitation forces him to be efficient and make every moment count.

“Mr. Fritze has his students actively engaged and immersed in a sea of Spanish from the moment they walk in the door,” said TOW principal Michael Conlon. “He doesn’t waste a second of the 45 minutes he has.”

National Board Certified in World Languages, Fritze trained in the “Natural Method Approach” at the University of Oklahoma. He teaches using TPR (Total Physical Response) and TPRS (Teaching Proficiency through Reading and Storytelling). These systems emphasize gestures, repetition, and oral interaction. Although Fritze teaches beginners, 90 percent of his classes are taught in Spanish.

“World language instruction is changing a lot, and I’m excited to be part of the change,” Fritze said. “Traditional grammar instruction has not historically shown results. If we want students to really communicate in a language, we need to actively use that language for communication.”

The walls of Fritze’s classrooms are covered with Spanish words and phrases, adding layers of visual cues to the auditory engagement. Fritze said students learn to incorporate the Spanish phrases they see and hear repeatedly. Gestures grow to words and then blossom into internalized sentences.

“Our job as language teachers is not to teach language, but communicate,” Fritze said, “to make language acquisition happen naturally, just as a parent does at home.” 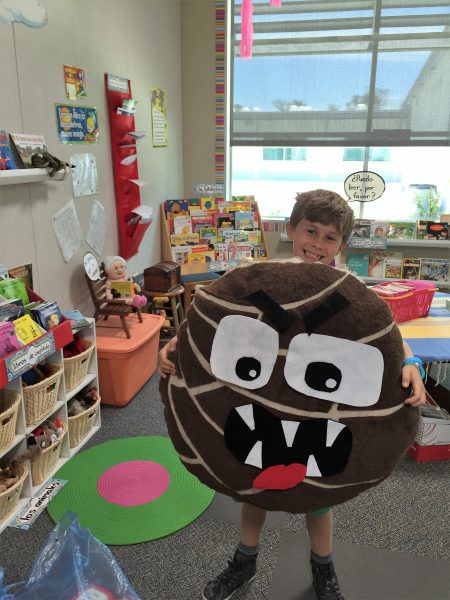 Fritze’s classrooms have chairs and rugs, but no desks; open spaces are used for movement. Students are encouraged to stand and act words out as they speak.

“I experiment with playful movements and props—anything that helps solidify the learning process,” Fritze said.

As Fritze’s students transition to middle and high school, teachers are seeing higher levels of language proficiency in the older students.

“Jason is a pioneer of a new way of teaching language,” said Thurston Spanish teacher Jeffrey Dipple. “His philosophy is different and it’s working. He sets a strong foundation and instills a love for the language and the culture. His success lets us accelerate our programs and get kids to a higher level much sooner.”

Language instructors around the world have become interested in Fritze’s teaching techniques. For the past few years, Cal State Long Beach has sent education students to observe his classroom methodology. Fritze has been asked to speak at many workshops and conferences, both nationally and internationally. This summer, he was a keynote speaker in France, and in previous years, he has been asked to speak in the Czech Republic, Turkey, Mexico and China.

“Jason is a worldwide leader in foreign language instruction, and we are lucky to have him as part of the LBUSD family,” Conlon said.