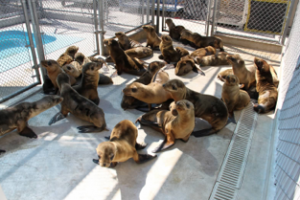 With the federal government declaring the extraordinary number of starving sea lion pups along the Southern California coastline an “unusual mortality event,” the door is opened for possible emergency funding for the Pacific Marine Mammal Center, a center spokesperson said this week.

The National Oceanic and Atmospheric Administration designated the increased number of malnourished and dehydrated young sea lions found on beaches and rocks as unprecedented and worthy of investigation.  The designation initiates funding for a federal investigation of the cause, said Jim Milbury, spokesperson for the NOAA Fisheries’ Long Beach office.  It will take months before any plausible cause is pinpointed, said Sarah Wilkin, spokesperson for NOAA’s investigation.

NOAA investigators are also examining an attack on a beached sea lion pup in Laguna Beach by a pitbull-mix and whether the incident will be possibly subject to legal action. Jim Beres, who oversees the city‘s animal rescue services, said state and local law enforcement codes don’t apply under the federal Marine Mammal Protection Act of 1972, which only NOAA can investigate, enforce and prosecute.

“Our own local Marine Protection Act only applies to people, it doesn’t apply to animals,” Beres explained.  “This is a problem because we’ve had other situations where dogs have been down on the beach and disturbed marine life.  It’s something we may want to address in the future if we want to expand the scope of our local MPA to also include animals.  At this point in time, it doesn’t.”

The 65-pound dog broke the leash-hold of its owner, Claudia Kelly, the daughter of retired astronaut Mark Kelly and stepdaughter of his wife, former U.S. Rep. Gabrielle Giffords of Arizona, who were visiting last month. The dog attacked the weakened sea lion, which died on Goff Island beach, below the Montage resort.  No citation was issued.

Beres said his office met with NOAA’s National Marine Fisheries Office of Law Enforcement, which can impose a fine of up to $10,000 for a violation of the federal marine-mammal protection law.

The emergency event designation allows Laguna Beach’s marine mammal center and others in the state to apply for federal funding such as the Emergency Prescott Grants from the National Fish and Wildlife Foundation, said PMMC executive director Keith Matassa.  Prescott grants offer assistance for “mass strandings” of marine mammals and other disasters. “The unfortunate thing is there’s only so much money in that pot,” said Matassa.

Since January, more than 1,000 marine mammals have been rescued in Southern California, from Santa Barbara to San Diego, according to NOAA statistics. About 920 have been rescued in Southern California, Matassa said.  Of the 150 treated in Laguna, between 15 and 20 percent have died. Last year, Matassa said the center was caring for about 30 animals, an average annual number.

Scientists are considering possible causes such as global warming, over-fishing, acidification of the ocean’s pH due to CO2 emissions and other pollutants, a change in the navigational patterns of food-fish, which prefer cooler waters, as well as possible local weather anomalies.

The goal of the center is to put an extra 10 pounds on the six- to nine-month old sea lions, to about 70 pounds, and to get them to eat whole fish, such as herring, before they’re released two to three months after arrival.

PMMC has asked for donations to help supplement its marine mammal food, medical and maintenance supplies as well as to augment volunteer help.  “We’ve had an outpouring of support from surrounding communities all over Orange County,” Matassa said.  “That is what’s helped us get through this.”

The center has received donations of all types of necessities, from Pedialyte, a child’s medical rehydration formula, and Karo syrup to biodegradable laundry detergent, dishwashing soap and paper towels.  Even meals for the nearly round-the-clock volunteers and gas gift cards for the center’s rescue trucks have been gladly received.

“I’ve been to a few other rehab centers around the United States and I’ve never seen this outpouring of support,” said Matassa. Money, too, has been contributed but totals have not yet been tallied, he said.

Due to the overwhelming number of rescues crowding the center’s capacity, city animal services officers are more selective with the sea lion pups they pick up.  An officer will locate the animal and assess its strength, explained city animal services officer John Thompson while answering a call to rescue a pup on Goff Island below the Montage Resort.  If the animal is critically underweight and listless, he explained, officers will take it to the center.  If it appears stronger, it will be left where it is, he said, and officers will try to monitor its progress in its natural habitat.

As a result, beachgoers will likely come across greater numbers of stranded and sickly looking sea lions, noted Milbury, and are being asked to call rescue services. He advises to leave the animals alone because they will bite and to stay a safe distance away so the animal does not return to the ocean.  The number in Laguna is 949-494-3050.

Despite the epidemic of sickly juveniles, the species is considered healthy with a population of approximately 300,000.