In his tiny, crowded Laguna Beach studio, Douglas Miller produces two diminutive paintings per day. Small, they are nonetheless flawless likenesses of Laguna Beach’s diverse vistas. “I’d starve if I just do big paintings,” said Miller, who by his recollection, has painted roughly 15,600 paintings since building his first booth at the Sawdust Festival in 1994.

Over his 21 years as an exhibitor, Miller painstakingly catalogued the small gems, 50 per page, in tattered notebooks annotating the painting’s completion date, who bought it and when. No newfangled data bases for Miller. He disdains computers except for postings on Facebook, rarely uses his cell phone and communicates from his studio via a corded, pushbutton relic. 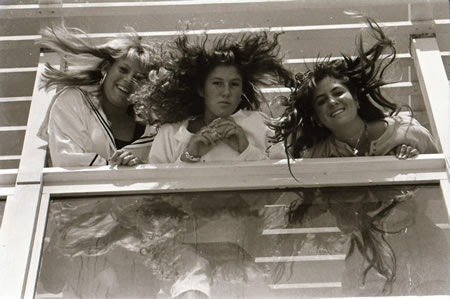 An accomplished violinist, Miller often performs at community benefits and churches and teams up to accompany singer-songwriter Sasha Evans.

He is equally well known locally as a prolific photographer, having roamed the town since 1972, film camera in hand, recording the evolution of a place once known as a bohemian enclave. He’s shot an estimated 350,000 images, he said.

His drive to chronicle Laguna Beach life is the focus of a film, “Sawdust and Sand: The Photographs of Douglas Miller,” a documentary by cinematographer and journalist Jason Blalock illuminating Miller’s intimate 44-year relationship with his hometown. Its first screening takes place Thursday, Dec. 18, at the Laguna Art Museum as part of its film-night series. “Eventually we are hoping to show the film at festivals around the country,” said Blalock.

Now a resident of Oakland, Blalock grew up in town, graduating from Laguna Beach High School in 1990. He studied at Wesleyan University, in Middletown, Conn., and earned a master’s degree in journalism from UC Berkeley.

“I remember Doug from my childhood, but I really did not know him. But when I saw the pictures he had

taken on Facebook, I saw a great story just wanting to be told,” said Blalock. “You can see through his work how Laguna Beach has changed through his photographs, a transition from funky art colony to a place reshaped by new money.”

Blalock said the film uses 28,000 Miller photographs, about 10 percent of his body of work. Winnowing the archive was the most time-consuming part of the project, he said.

“What comes through about Doug is that he is someone we have seen (around town) but know little about. But, while so many artists have had to leave town, Doug is a survivor. He makes changes work for him,” he added.

The “Film Documents Laguna Beach from Local’s Lens” in the Dec. 11 edition incorrectly describes how long Douglas Miller has been a Sawdust Festival exhibitor. He has shown at the art show since 1971. In addition, film maker Jason Blalock reviewed 28,000 images in making “Sawdust and Sand: The Photographs of Douglas Miller,” but not all were actually featured in the film.

The “Film Documents Laguna Beach from Local’s Lens” in the Dec. 11 edition incorrectly describes how long Douglas Miller has been a Sawdust Festival exhibitor. He has shown at the art show since 1971. In addition, film maker Jason Blalock reviewed 28,000 images in making “Sawdust and Sand: The Photographs of Douglas Miller,” but not all were actually featured in the film.