On the corner of High Drive and Cedar Way in North Laguna stands a little tiny village of welcoming and kitschy gnomes.

The gnome village is the fond collection of a seemingly well-adjusted person, Jennifer Hart, the lone remaining occupant of the Laguna Playhouse costume shop.

Hart has no particular reason for creating the gnome home for the miniature guardians of precious underground treasures, known for slipping in and out of the earth as easily as people move through air.  Not particularly versed in gnome nomenclature, she said she knows little about the pint-sized fantasy-world creatures, like that they express affection by rubbing noses, never go bald and were invented by 16th century Renaissance alchemist Paracelsus.  And, she isn’t about to look into any of it anytime soon.  She just likes them.  “They make me happy,” she explained.

She does know, however, that magical things tend to happen in the tiny tree-stump-house since the gnomes have been hanging out on her corner. “Nobody takes them,” she said, which is not too surprising. “In fact, people add things, like another gnome or a fairy, and they rearrange them.”

But the funniest thing that has happened over the years, although not all that magical, is that her husband Noel has “morphed into one,” she said. “Someone sent me a gnome that looks exactly like him and I thought “oh my god.” 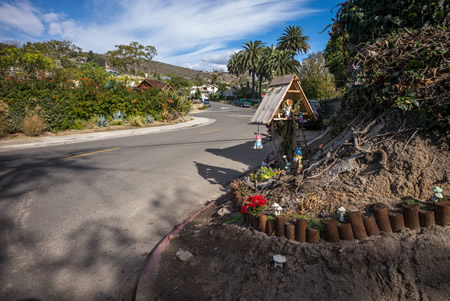