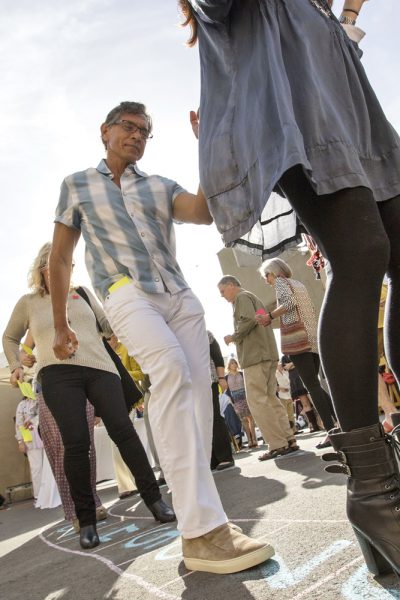 The community is invited to LOCA’s Birthday Bash, its biggest fundraiser to date. Enjoy food and wine, live music by South Laguna Garden Band, games for grown-ups and auction items from 4-7 p.m. on Sunday, March 24, in Bridge Hall at Neighborhood Church, 340 St. Ann’s Drive. LOCA has named the Festival of Mosaics program committee as the Birthday Bash honoree.

Birthday Bash tickets, $50 each or four for $180, are available at locaarts.org. Parking is free. More information is available at 949-363-4700 orwww.locaarts.org/event/loca-birthday-bash-annual-fundraiser. Proceeds support LOCA’s education programs serving people of all ages, backgrounds and abilities throughout Laguna Beach.

All Invited to Hear Choir Performance

Bel Canto singer and LBUMC member, Caterina Paton, is one of 20 singers who will travel to Indonesia, including Bali, in May. “This is APU’s first mission trip to Indonesia. We’re putting on some large concerts, but also getting to participate in some worship services,” said Paton. “Everyone is excited to get to know and learn about a new culture.”

Following the service and the perfomance, a Polynesian luncheon will be held in Healton Hall. For more information, contact the church at 949-499-3088 or visit [email protected]

In addition to the usual awards, a new Peoples’ Choice award was introduced through an LPAPA Facebook campaign, where individuals were given the opportunity to vote for their favorite painting.

All paintings are on exhibit at the Forest & Ocean Gallery in Laguna Beach until March 24. They can also be viewed online through LPAPA’s Best of Plein Air expanded gallery at DailyBrushwork.com. For show details, visit www.lpapa.org.

“We are honored and thrilled to have Academy-Award winning actress Marcia Gay Harden as the 2019 guest speaker of Art Star Awards,” said Rosemary Swimm, chair of the Laguna Beach Arts alliance.

The actress will share stories about her successful and diverse career, which includes films, television and theater. She is a Tony award winner for her performance in “God of Carnage,” and she recently concluded a three-season run in the television drama “Code Black,” for which she received a People’s Choice Award nomination. On the big screen, she stared in the “Fifty Shades” trilogy. Harden also recently published a memoir.

For tickets, contact [email protected] Tickets are $100 each and include dinner.

Pianist, performer, playwright, producer, and director Hershey Felder will be honored at the Laguna Playhouse gala on Saturday, May 18.

Felder has portrayed composers such as George Gershwin, Fryderyk Chopin, Ludwig Van Beethoven, Leonard Bernstein, Irving Berlin, and Piotr Ilyich Tchaikovsky, bringing both their music and their stories to life. Felder is also the writer and director for the internationally performed play-with-music The Pianist of Willesden Lane, based on the book The Children of Willesden Lane; the producer and designer Louis and Keely: ‘Live’ at the Sahara, directed by Taylor Hackford; and writer and director for Nathan Gunn Flying Solo.

Ellen Richard, Laguna Playhouse executive director, said, “Hershey Felder is a unique talent that transcends traditional theatrical boundaries putting the roles of artist, writer/composer, and director into that of one. He is no less an internationally acclaimed world treasure, and we are proud to be able to honor him on this special evening.”

This year’s gala, co-chaired by trustees Lisa Hale and Glenn E. Gray, will begin with a VIP reception, where Felder and special guests will perform. The evening program will also feature a performance by Felder and a heartfelt tribute to Felder and conclude with live music and dancing. More on the gala can be found at www.lagunaplayhousegala.org.

Laguna Playhouse will also conclude its renovation of the historic Moulton Theatre in May, celebrating 50 years since it was built.