Over time, the elements took their toll. The gift by the emerging artist deteriorated enough city officials deemed it unsafe for public display and earlier this year considered removing the sculpture valued at $10,000 from the city’s collection altogether. But after an appeal from the artist’s mother, who pledged to restore the piece at her expense, last month the Arts Commission agreed to a June 27 proposed deadline for repairs, barring any further expense of public funds.  About $3,300 already paid for the sculpture’s original base and on previous repairs, according to cultural arts manager Sian Poeschl.

Harmon, also a stylistically diverse painter, was influenced by 20th-century Expressionists and impulses of his own psyche. Battling addiction and bi-polar disorder, he took his own life in 2006 at age 33.

In order to resurrect “Cathexis” and return it to its Riddle Field home, Alice Harmon plans a fundraiser on Saturday, May 5, between 4 and 7 p.m. at the studio of sculptor John Alabaster, who will repair the work. Restoration costs are estimated at $8,000. “I can’t afford to fix it myself, and I’m hoping others might be able to help,” she said. 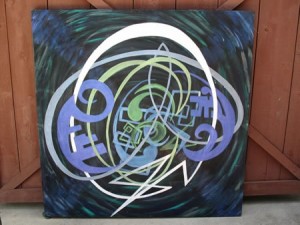 Attendees are urged to park at the ACT V parking lot, 1900 Laguna Canyon Rd., and take a shuttle to the Alabaster studio in Laguna Canyon. A bluegrass band will entertain as guests enjoy Olamendi fare for dinner. Alice Harmon hopes for 150 guests but would love a bigger turnout.

“It is a good piece of art, and we won’t get any more work from this promising young artist,” said Alabaster. Restoration will require sandblasting exterior paint, dipping it into hydrochloric acid to remove rust and cutting out corroded areas, rewelding areas and then galvanizing and repainting the piece to weatherproof it further, he said.

Though the piece received praise for its aesthetic appeal, Alabaster noted its disintegration shows the earmarks 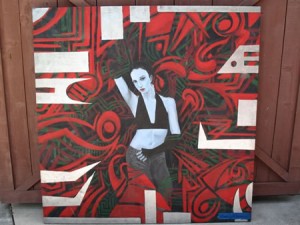 of an artist inexperienced at creating to withstand the rigors of public art. “The sculpture should have been made from stainless steel and the welding looks somewhat hand-made but Steve used the materials and techniques that he would have had access to as a young, aspiring artist. He was still finding his way in a variety of media and that’s the charm of the piece, which all of us want to keep.” 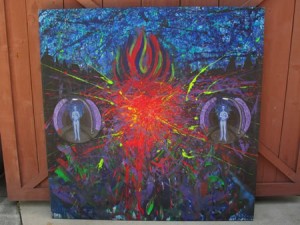 “The first time I saw Steven’s work I was blown away. He was almost exclusively creating art for me except for an odd commission here and there. Hopefully he is creating art in a better place,” wrote Tejpaul via e-mail.