By Donna Furey, Special to the Independent 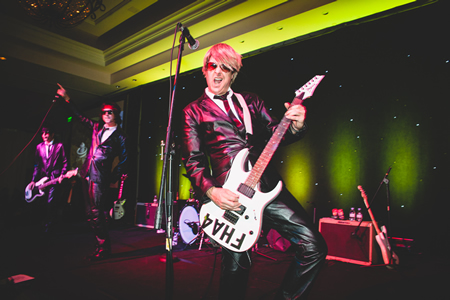 Choices abound for New Year’s celebrations in and around Laguna Beach this year, including two different Gatsby-themed costume parties, an ‘80s party, and a murder mystery dinner.

And for those desiring a nature-oriented start to the new year, it will even be possible to explore the tide pools during a negative tide at Crystal Cove.

For the first time in many years, Hotel Laguna’s New Year’s Eve party is back with Jason Feddy and his Beatles tribute band, according to Stefan Andersen, the hotel’s food and beverage manager.

At Laguna’s Montage Resort, 30801 S. Coast Highway, a ballroom gala starts to whirl from 8 p.m. to 1 a.m., which includes a five-course dinner with wine pairings, dancing, live music and a champagne toast at midnight for $350 per person, tax and gratuity included. In its Studio Restaurant, a five-course meal with wine pairings also includes live music, dancing, party favors and midnight champagne toast for $450 per person, $300 without alcohol.

In the Pearl District, Wine Gallery Bar and Kitchen, 1833 S. Coast Highway, will serve a four-course dinner with a complimentary glass of champagne for $50, or $75/ person with wine pairings. Seating until 8 p.m.; no reservations are required.

In the HIP District, Mozambique Restaurant, 1740 S. Coast Highway, is hosting an ‘80s flashback costume party with music by Past Action Heros, and a four course menu. First seating, 5-7 p.m., $55; second seating, 8 p.m., $95. No cover with reservation; $20 without. Shuttle service will be available.

Splashes at The Surf and Sand Resort, 1555 S. Coast Highway, will offer a four-course dinner menu from 5-11 p.m. for $110 per person including party favors.

The new Selanne Steak Tavern, 1464 S. Coast Highway, hosts their first New Year’s Eve event with two seatings for a five-course tasting menu and live jazz. There will also be live countdowns and toasts throughout the evening celebrating the arrival of the new year across the U.S. First seating from 5- 6:30 p.m., $85; second seating, 9- 10:30, includes party favors, $115 per person. Both seatings include a glass of Veuve Clicquot champagne.

La Casa del Camino, 1289 S. Coast Highway, is presenting a free New Year’s Eve party from 7 p.m. to 1 a.m. with passed appetizers and desserts in the lobby. The K’ya Bistro will serve their regular menu plus holiday specials. Reservations:  949 376-9718. Its Rooftop Lounge will be serving appetizers and holiday drinks. Reserve at: 949 505-5087. All venues will serve a complimentary glass of champagne at midnight.

The Marine Room Tavern, 214 Ocean Ave., will start their party at 9 p.m. with the Tricia Freeman Band and offer hats, horns and a champagne toast at midnight.

At Romeo Cucina, 249 Broadway, the party starts at 9 p.m. with a three-course dinner, dancing with DJ Jimmy and a champagne toast for $75.

For the first time, there’s a vegetarian menu at Motif Restaurant at Dana Point’s St. Regis resort. The hotel is hosting a Gatsby style party in two ballrooms. Tickets are $100 to $175 and include complimentary beverages, DJ, live band and dancing. At Motif Restaurant a holiday menu and a vegetarian menu will be served starting at 7 p.m. For information: 949-345-3987.

At the Ritz Carlton in Laguna Niguel, its Raya and Enosteak restaurants are offering four-course menu from 6-10 p.m. for $115 and $145, respectively.

Dana Point’s Laguna Cliffs Marriott Resort, 25135 Park Lantern Rd., invites guests to ring in the new year with a champagne toast and a balloon drop in the OverVue Lounge with live entertainment by Groove All Stars. No reservations, $25/ticket. New Year’s Eve dinner will be served in the Vue Restaurant from 5-9 p.m. for $99, which includes complimentary valet parking and live entertainment.

Farther afield, Irvine’s Mc Cormick and Schmick’s, 2000 Main St., offers diners the opportunity to solve a murder mystery while enjoying a four-course dinner show, “Hollywood Confidential” at 8:30 p.m. Tickets are $129.50 per person and include free parking and midnight champagne toast.

Avoid the worry of DUI, traffic and parking by using one of these options. As Josef Wojtkow, founder of Your Car-Our Driver, (949 283-0863) says, “Plan your exit strategy.”