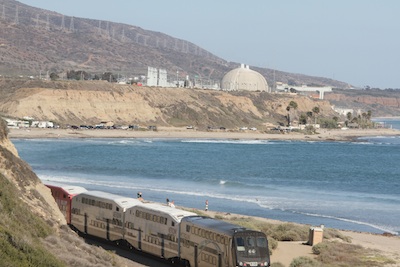 Officials at Rosemead-based Edison, the majority owner of the idled nuclear plant, said the current storage area is nearing capacity.

The question of storing nuclear waste at San Onofre Nuclear Generating Station (SONGS) at Camp Pendleton is a hot topic of two meetings this week.

A contingent of protestors from Laguna Beach and other surrounding beach cities will attend the California Coastal Commission meeting at noon Tuesday, Oct. 6, at the Long Beach Convention Center, 300 E. Ocean Blvd.

The commission will hear Southern California Edison’s request to build and operate a storage facility for spent nuclear fuel inside one of the three decommissioned nuclear power generating units there.

A core group of approximately 20 activists are objecting to Southern California Edison’s plan to store 1,600 metric tons of volatile radioactive nuclear waste at the plant. The plant’s two nuclear-power units were shut down in January 2012 due to excessive wear in the cooling tubes of the steam generators. The plant was permanently decommissioned in June 2013.

“This fuel is highly radioactive and requires secure storage for thousands of years to prevent harm to humans and the environment,” the commission’s agenda report states. Edison is proposing to store the waste in canisters set below ground until the federal Energy Department finds a place and appropriate transportation to move them, according to the report. Edison’s plan is to partially bury the spent fuel rods in a concrete filled-berm that will surround 75 fuel-storage modules. The modules will contain stainless steel casks filled with spent fuel, according to the commission’s report, which also states that 2,668 spent fuel rods are now in wet storage pools in the units.

“Although Units 2 and 3 have been permanently shut down, SONGS still circulates ocean water within the plant to cool the spent fuel, and thus continues to discharge cooling water,” another Coastal Commission report stated.

proposing to use, saying that the contracted company has no track record of offering safe storage, said Rita Conn, organizer of the advocacy group Let Laguna Vote.

“No one knows what kind of shape the canisters will be in if the spent fuel stays on-site for 20 or more years before it’s moved, or if they’ll be safe to move,” Conn said