McAfee’s selfless direction of a medical evacuation during a 1966 firefight in Vietnam earned him the Naval Cross, the Navy’s second highest decoration for combat gallantry. “Through his valiant efforts, he prevented the possible annihilation of a Marine battalion by a numerically superior enemy force, and has undoubtedly saved many lives,” the citation reads in part.

“I’m delighted to participate, but this award is not about Carlos McAfee,” said McAfee. “It represents not only the military, but also all the first responders in this country.”

The parade that begins from Laguna Beach High School runs from 11 a.m. until 1:15 p.m. Floats will start on Park Avenue, turning right onto Glenneyre Street before turning right again onto Forest Avenue, ending just past City Hall. The farmers market will be closed for parade day, and downtown street closures will begin as early as 10 a.m. Free trolley service will begin operating at 9 a.m. to help alleviate parade-related traffic. The free trolleys will run along Coast Highway, from Cajon Street in North Laguna to the Ritz-Carlton in Dana Point. Closed streets include portions of Legion, Park, Glenneyre, Forest and Ocean avenues. Once the parade is over, an awards ceremony will take place at the Art-A-Fair/Tivoli Too grounds. 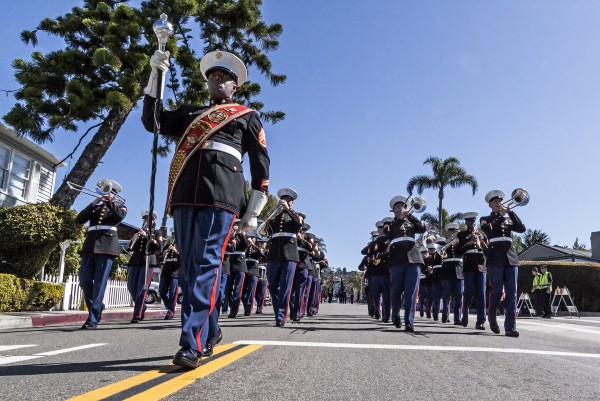 Eighty-eight entries are scheduled to walk, roll or trot along the parade this year. Newcomers include Blue Bell Foundation for Cats, Drama Kids International, LOCA Arts Education and Laguna Beach Lions Club, a service organization re-launching after a 34-year absence. The parade serves as the club’s inaugural effort to promote their return to Laguna Beach, says club member Justin Myers.

With the Laguna Beach Water District celebrating its 90th anniversary and its president honored as grand marshall, district staff decided to return to the parade line-up after a long absence. Asked about the district’s entry, spokesman Chris Regan said, “it’s going to be big, it’s going to be patriotic and it will include a conservation message.” 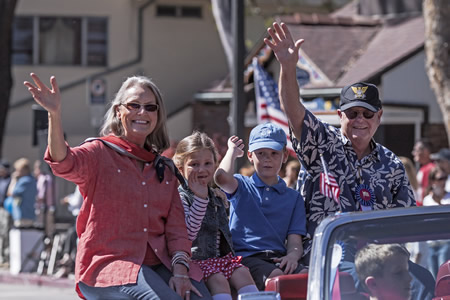 Other honorees include citizen of the year Stu Saffer, chosen for his involvement and contributions to the community; junior citizens Elle Mahdavi and Alex Rounaghi, selected by school staff based on their scholarship and service; artist of the year Dion Wright; and athletes of the year Nick Hernandez and Sam Stinnett, skimboard champs.

The annual community parade is organized by a non-profit with a mission of fostering love of community and country. “We are like a well oiled machine,” parade president

Charlie Quilter said of this year’s preparations. He was quick to credit the team of Ed Hanke, Kathleen Fay and Sandi Werthe. Quilter explains Laguna Beach’s first parade took place during a time of adversity for the country. “The United States was deep into the Vietnam War and new forms of counter-culture were arriving.” The first parade on Feb. 22, 1967, was led by Walter and Cordelia Knott of Knott’s Berry Farm as co-grand marshalls. “Now in it’s 50th year, this is an event that has been taken part in by three generations and is a rite of passage for Laguna Beach residents. Every resident is either watching or taking part.” This year, local radio station KX 93.5 FM will stream live audio from the event and will later post a video of the event on Youtube.

Today, the honored patriot McAfee and his wife live in a Top of the World home custom designed for them by the late Mark Singer, an architect they both admired. Their patriotic roles now come in a different venue. They’ve made a late-in-life career change and in the last 10 years have appeared in nearly 100 films, including “Independence Day” and “Green Mile.”

George Gore Browne is a journalism student and a Laguna Beach Independent intern.

The line-up is as follows: