I was on my third reading of last week’s Indy. I know. I know. Most readers read through one time and then move on. But I can’t move on. I’m stuck in retirement with very little to do. So, I keep going over the same stories to be sure I didn’t miss something important. Seems silly. But think about it. When you’re old, like me, you don’t want to miss something important, such as, finding out the meaning of life. My mentor, who doubles as my sponsor, said the meaning of life, will reveal itself in a local event. He also reminded me that I’m wrong to think the meaning of life has already revealed itself in visions that I swear to see at the bottom of every beer can… “Have another.” I’m not taking any chances. I do both. For every Indy read through, I have a beer. Up until now, the meaning of life seems blurry.

Now on my fourth read through and fourth beer, I look at the Indy article “‘Blue Wave’ Predicted by Democrats Officially Hits Orange County Voter Rolls.” For the first time, Democrats officially outnumber Republican registrants in the historically Republican stronghold of Orange County. It is now 547,458 Democrats compared to 547,369 Republicans. Democrats now have 89 more registrants, which ties the Guinness World Book Record of Muscovites squeezed into an American voter booth. Interesting coincidence, but how does this article lend itself to finding the meaning of life? Maybe the article is telling me that I should switch from beer to vodka. Or maybe the message is God’s chosen people are now Democrats. Or could it be God’s favorite color is blue? Think. Drink. Think. Drink.

Oh well, life’s meaning continues to elude me after another full paper read through. I pop a fifth beer and start again. I begin with the Indy article, “Review Process of Village Entrance Art Proposal Begins.” The Arts Commission has started the review process for an Art in Public Places installation at the Village Entrance. Artist Marc Fornes and his team of artists and architects have designed and built a number of thin-shelled pavilions that aim to provide unique spatial experiences while also contributing to the visual identity of the site and catalyzing community engagement. The pavilion-style sculpture created from layers of aluminum suspended over pedestrian and bicycle pathways projects a sense of space full of opportunities for artists and the community to gather for such events as live music, readings, screenings and multiple pileups with walkers, runners and cyclists using the same space. Seems dangerous. So, I think. I drink.

There’s something more to these village pavilion drawings. Then…wham bam it hits me. The pavilions look just like mushrooms or the homes the Smurfs live in. The Smurfs are blue. My heart races in anticipation. I quickly go back to the Blue Wave article to be sure. Yes, there it is. In addition to registered Democrats and Republicans there is the “No Party Preference” at 440,711. That’s the same number of Papa Smurf off springs. Eureka. I’ve found the meaning of life. God, in his mysterious ways, has revealed my true identity. I’m the wizard Gargamel, the archenemy of the Smurfs. It’s my life’s meaning to oppose these mushroom-looking pavilions masquerading as artwork, when they are really camouflaged Smurf low-income housing built to stuff and redline the Orange County voting district. I can’t wait to tell my cat, Azrael.

Crantz tells the Indy he will continue with multiple Indy readings and drinking to look for more signs. 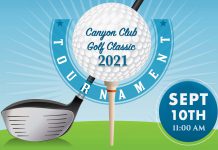