In the bodyboard final, freshman Spencer Davis secured his first win of the season.

In the girls shortboard, Grace Wellsfry finished in second and Coco Putnam was third.

The boys shortboard final was an epic Laguna battle with five of the six finalists. Tobie Grierson finished first, followed by Willy Hogan in second, Jake Levine in fourth, Dylan Davis fifth and Zach Levine sixth. Noah North missed out on the final and finished in seventh.

Jake Levine again stood out to finish first in his heat. Along with Levine, Willy Hogan, Noah North and Mike Chapman had second place finishes. Dylan Davis had some good rides and placed third while, Connor Brashier, Shane Chapman, Jeremy Shutts and Dante Madrigal all did well finishing with fourths.

In bodyboard, Spencer Davis had the best ride of the heat, placing third. Ryan Meisberger finished fourth in boys longboard.

While the team did not win the overall points, all the divisions’ points added up for a big win, 43 to 41 for boys shortboard surfers.

The league championship will take palce Thursday and Friday, Nov. 19 and 20 at T-St in San Clemente. 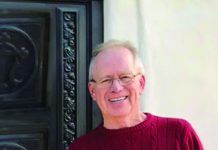