Civic valor defined Bill Rihn. Steadfastly, for 11 years (2003-2014) he served with distinction as president of the South Laguna Civic Association. Almost single-handedly he achieved the removal of South Laguna’s only remaining billboard along Coast Highway. Doggedly, he pursued local merchants to obtain right-of-way easements for South Laguna’s streetscape lighting and other improvements along that thoroughfare. He was involved in every major step required to establish the community’s prize-winning garden. No one worked harder than he to regain a neighbor-encroached pathway to the beach, named for beloved South Laguna resident Carol Thompson. For years and years he hosted and led our monthly board meetings in the living room of his modest home at the corner of Fairview and Third Avenue.

Beyond these neighborhood activities, he did much else. He variously served as councilwoman Toni Iseman’s campaign treasurer, helped write the city of Laguna Beach’s climate protection action plan, and having earlier been a member of the Mariposa school board volunteered as a tutor in our city’s schools.

William Joseph Rihn, a Caltech engineering graduate and founding partner of Pasadena-based Kinemetrics, which designs instruments for measuring quakes, tsunamis and nuclear events, was well-known throughout Laguna Beach and beyond. Last year he stepped down from his leadership post due to declining health and passed peacefully in his sleep Nov. 2 while in the loving care of his daughter, Jennifer and son, Dennis.

A sampling of comments about Rihn’s public life reveals much about the person we are memorializing. Ginger Osborne, president of SLCA in 2001, recalled: “Shortly after Bill moved as a permanent resident into his South Laguna home, he began regularly to attend SLCA meetings as a guest. Other guests at our meetings came because they wanted to promote a particular issue before our board, but Bill was there to learn and contribute. He so impressed other board members with his clear thinking, and organizational skills, that when I vacated the SLCA presidency to move on to responsibilities in another civic organization, the board unanimously chose Bill to be the next SLCA president. I knew the organization was in good hands.”

Greg O’Loughlin, the current SLCA president, reflected on Rihn’s love of involvement in community matters. “He had so much to give; an abundance of ideas and energy just flowed from him. After working with him, I saw in so many ways how he was always there when our community needed defending or when someone needed help.”

Says former Laguna Beach mayor and longtime SLCA board member Ann Christoph, “He designed a machine to monitor earthquakes and kept a working model in his living room. He was always up for showing kids in the neighborhood the tracks of the earth’s movements recorded by the machine. He and his company designed an earthquake monitor that was sent to the moon by NASA to measure ‘moonquakes.’ . . .  Often I would call to ask if I could stop by and talk over how to deal with a particularly thorny issue,” said Christoph. “He was always thoughtful and direct, and suggested good ways to move forward.”

Moving matters forward was Rihn’s specialty. At times he interacted with former Laguna Beach City Manager Ken Frank, who had this to say regarding South Laguna’s streetscape improvements: “Without [Bill’s] support the project would have extended for many, many more months. Bill was successful in several instances where the city staff had been unable to persuade a reluctant property owner to give an easement or perform an improvement.” 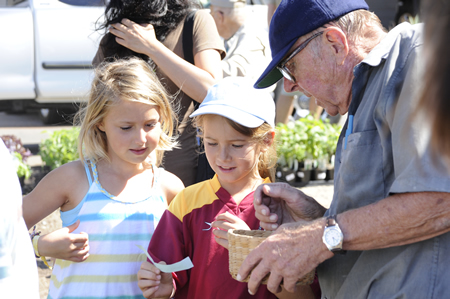 Even the tempests of Laguna Beach elections did not unnerve Rihn. Former mayor and current council member Toni Iseman remembered Rihn’s tenure as her treasurer in one election: “Bill was patient and yet precise. As my campaign treasurer, he rolled with my craziness. Being in his presence was soothing. Young at heart, his optimism was inspiring. He was one of a kind.”

From my perspective, Bill exemplified the selflessness, fairness, clear-headedness, dedication, and can-do attitude required of the best leaders in the public sphere. I will miss our banter about personages in California and U.S. history. Only now do I realize how much of a force he has been in shaping South Laguna’s recent past. I loved his broad range of interests in science, history, music, and yes, making key lime pies and other desserts. . . . He made such a difference in our community.

The best way to honor Bill Rihn is to carry forward the work that so engaged him locally. A memorial gathering paying homage to Bill’s life and contributions will be Saturday, Dec. 5 at 2 p.m. at the South Laguna Community Garden. For more information, email Jennifer Rihn: [email protected]

The author is a South Laguna Civic Association board member.