It stands to reason Pribram is a bit territorial about his home break and isn’t shy about complaining over suspected damage to the marine habitat.

He started asking questions of city and coastal authorities in recent weeks soon after tractors piled up 37 3,000-pound cement blocks on the beach to provide wave protection for an Agate Street beach-access construction ramp.

The temporary seawall “is such a public hazard,” said Pribram, who also questioned what he considered the contractor’s overly intrusive safeguard. “The city is so environmentally conscious and this is how they honor it?”

He said he’s fished nails from tidepools, can point to recent chips on the bluff rocks and wonders why the job sits idle for days and workers make no effort to take advantage of low-tide.

Agate Street Beach lies within a state marine reserve, a designation that prohibits damage or take of all marine resources, geologic, living or cultural, according to the state Department of Fish and Wildlife regulations.

The coastal bluff, though, falls under the authority of the state Coastal Commission, with oversight over land use and local access in the coastal zone. Because the city of Laguna Beach has developed its own Local Coastal Program, a development road map, the city can issue their own permits for projects that comply with the program without seeking Coastal Commission authorization.

Approved permits can be appealed to the commission, but the Agate Street project was not, said Noaki Schwartz, a commission spokeswoman.

Andrew Willis, the commission’s enforcement supervisor for the Ventura, Long Beach and San Diego offices, said the Agate beach improvements fall within the city’s jurisdiction and does not present an enforcement issue.

“All of us know construction projects are messy,” he said. “The city’s done the best they can.” He called the temporary beach obstruction a “trade-off” necessary to protect equipment in order to improve public access.

“We all want access and a better stairway,” said Willis. Construction is done in winter to avoid disrupting crowds in summer, even though the beach is broader with more sand in summer months and the blocks would be less of a hindrance, he said.

The city’s elected officials approved the project last August, Public Works Director Shohreh Dupuis said. Plans to rebuild deteriorated stairways at four beach-access points have been under consideration for several years and two have been completed.

The Agate stairs were closed in October 2016 due to storm damage. Besides replacing the sand-level stairs, improvements to the bluff top include wheelchair access to an overlook and landscaping.

“The large temporary blocks are needed for the lower stairs construction and will not be washing out to sea due to their heavy weight,” said Dupuis.

Pribram said he will meet with Dupuis this week and hopes to convince her to rethink the project’s construction staging with “a more responsible plan.”

High tides have already tumbled the blocks and Pribram speculates that a west swell and six-foot waves predicted this week could undermine the blocks and ramp.

“This isn’t doing anything; it’s a hazard and an eye-sore,” he said. 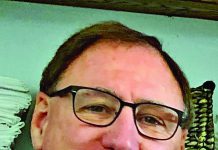