“It’s my worst nightmare,” Willis recalled. “I was freaking out.” Willis said she spotted the brush fire early Saturday afternoon. As evacuations were issued for her neighborhood, she packed up her daughter and the pets she could manage—some unwieldy chickens had to be left behind with the gate open so they could escape if need be—and stayed with her mother in Aliso Viejo. “We went to my parents’ house and watched it on the news. It was pretty terrifying to see.”

On Sunday morning, Willis and her mother, Leigh, returned to her home and were happy to find the chickens were safe. They walked to Top of the World Elementary School and watched as firefighters worked to extinguish hot spots in the canyon.

“To see the fire so close to the school was really scary,” she said. “The firefighters did a great job. We’re really thankful.”

Willis was in high school in Laguna when the disastrous fire of 1993 erupted and recalled “driving around and seeing all of the homes that were destroyed.”

“My best friend lost her house. It was heartbreaking,” she said. “It was scary to remember that and have this happen. [My friends] all have houses up here now, so we can kind of see what all of the parents were going through back then.”

“That’s why this scares you so much,” she said. “This was so close, and luckily the winds were going the other way.”

The Aliso Fire grew from a 1-acre brush fire in Aliso Woods Canyon to an estimated 250 acres in just a few hours on June 2, fueled largely by erratic canyon winds. Over 400 firefighters, four helicopters and six air tankers responded quickly to the blaze, with a unified command by OCFA, Orange County Sheriff’s Department, Orange County Parks and Cal Fire.

On Sunday, the size of the fire was downgraded to 150 acres, but on Monday OCFA tweeted “Fire was mapped today and the fire’s acreage was updated to 175 acres.” As of Wednesday, June 6, the fire was 85 percent contained, with 348 fire personnel still on scene, according to OCFA officials. Complete containment was expected by Friday.

“Weather has been favorable for firefighters as they continue fire suppression repairs in the fire area with mop up to ensure there are no hot spots,” authorities said Wednesday. “Crews will continue to patrol the area for the next three days.”

The cause of the fire was still under investigation as of Wednesday, and OCFA officials are asking the public for assistance. 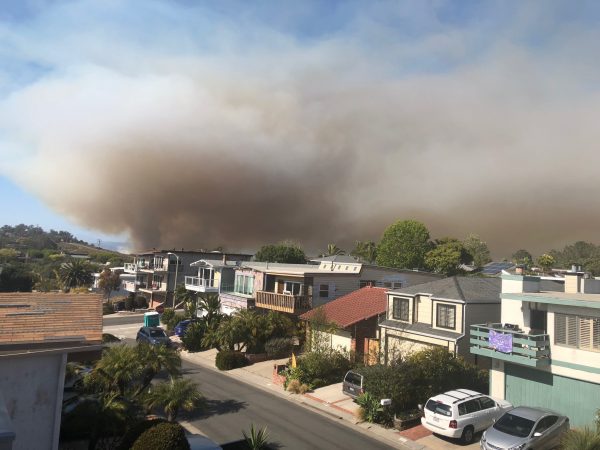 The fire was initially reported just after 1 p.m. on Saturday afternoon below Top of the World and behind Soka University.

Authorities issued evacuations of 1,500 residents in the Top of the World and Old Top of the World neighborhoods on Saturday and evacuated all animals from the Laguna Beach Animal Shelter later in the evening. A temporary evacuation shelter was opened at the Susi Q Community Center, with information and staff available to assist evacuees.

By Sunday evening, city officials reported that the blaze had stopped growing, and all evacuations were lifted in Laguna Beach. By Sunday afternoon, the Aliso Fire was 10 percent contained, according to Laguna Beach Fire Chief Mike Garcia.

No structures were damaged, according to OCFA officials. OCFA reported a total of five firefighter injuries in a June 6 press release.

To register for future emergency alerts, visit AlertOC at www.alertoc.com. Residents can also sign up for Nixle alerts by texting 92651 to 888-777. For more information on fire safety, fire prevention and emergency preparedness, visit www.lagunabeachcity.net.