Edited by Andy Hedden, with contributions from Patricia Truman.

The next time you’re on the 200 block of Ocean Avenue, stand across the street from Wells Fargo Bank and

take a good look at the grand edifice that represents one of Laguna’s most important financial legacies.

Built in 1961, it was the fourth and final home of Laguna Federal Savings and Loan.  “We’re local and we love it,” was the institution’s operating mantra for over 50 years.  FDIC records show that Laguna Federal Savings was established on June 24, 1935.  Unfortunately, there were no records to indicate where their first location was.

In 1938 they set up shop on the corner of Ocean Boulevard South (South Coast Highway) and Ocean, where Johnny Rocket’s is now.  By then the bank already had a reputation for being lender friendly, loaning money to homesteader and businessman alike, all in an effort to build Laguna into a full time community, rather than just a weekend getaway.  This even included lending to folks who were putting up bungalows without foundations.

In the early 40’s, “Laguna Fed” moved into spacious new digs at 222 Ocean Avenue, until recently the Big Dog

store.  The current structure has been radically altered from the building that was the S&L’s third home. Originally built in Monterey style architecture, it not only had lush lobby with hand-hewn high beam ceilings, tile floors and corbels, but a flower-laden patio with a fountain and benches.  People would often stop and rest in this little oasis, whether they had banking business to conduct or not.

Upstairs there was a handsomely decorated penthouse for board meetings, complete with a kitchen.  There were also several other small rooms, including a library that had its own veranda.  And if you needed to make a stealthy retreat after a meeting, there was an outside stairway that lead to the private parking lot in back.  At this point in time Laguna Fed was the only S&L in Orange County south of Santa Ana and was the major lender to South Orange county residents.

Behind every great bank stands a great woman

You can’t talk about Laguna Federal Savings and Loan without glorifying Lorna Mills, who started working there as a clerk in 1936 and retired over 50 years later as president, manager and vice chairman.

When Mills joined the fledgling institution, she was one of three employees, one of whom was founder Andrew Hall.  The intrepid band served as janitors and window washers as well.  The S&L’s business machinery consisted of two typewriters and one adding machine.  There was no vault; assets were locked up in a filing cabinet.  A graduate of Newport Harbor High School in 1934, the Depression derailed Mills’ plans to go to college.  Instead, she opted to enroll in Johnson’s Business Institute in Santa Ana to learn a more practical way of earning a living; shorthand, typing and business law.

The daughter of a rancher, Mills’ father raised her without any thought of what a woman could, or could not, do.  She would help with the chores, work on the tractors and tend to the horses.  This gave her a confidence that eventually propelled her into becoming the first female S&L president in the state.

Through the 40’s and 50’s, her position grew along with Laguna Federal.  Mills had become the association’s secretary-treasurer and secured a position on the board of directors.  As for the association, it was now financing most of the homes in Laguna, as well as developments in Lake Elsinore, Huntington Beach, Irvine, Garden Grove and Westminster.

In 1957 when founder and president Andrew Hall died, the board named Mills to succeed him.  Due to her years of service, and keen eye for business, the transition was smooth and productive for the leading lady operating in an exclusively man’s world.

Mills was known to take chances, never forgetting the personal side of the heavy financial decisions she had to make.  She avoided foreclosures at all costs, often giving people extension upon extension.  She also loaned to individuals that no one else would, including churches and still-wet-behind-the-ear entrepreneurs.  The latter included a small group of developers who, in 1958, wanted to build a large hotel near the recently opened Disneyland.  At that time the area was still very much in the boondocks, and other lenders scoffed at them. Mills and Laguna Fed stepped up to the plate and financed the project.  The hotel was a huge success, the first of many for the hoteliers that she aided.

Mills was also not afraid to reinvent the rules.  She was one of the first S&L presidents to fathom the intricacies of

financing homes built on leased land.  In 1960 she wooed new accounts away from other S&L’s by paying bonus dividends to depositors.

Interestingly, for as much as she was an integral part of the community, she was not a Laguna Beach resident.  She lived in Newport Beach since the early 30’s; it was her way of distancing herself from her work. A devoted equestrian, in 1980 she purchased a 20-acre ranch in Murietta, where she would spend her weekends.  There she bred her beloved Arabians, which would often be seen in the Patriot’s Day Parade.  Her horseback exploits were not limited to Southern California, either.  She took riding tours though the Middle East, England, Morocco and Poland.

Mills was actively involved in many philanthropic causes, but her efforts were always for the cause, not self-aggrandizement or to further Laguna Fed’s business.  That being said, Mills always put work first.  She never worked “banker’s hours.”  Long days were common.  She never married, never had children.  When her mother had cancer, she was at work when she died.  The same goes for the day of her funeral.

The bank that Lorna built

Ask anybody in the know, and they’ll tell you that Mills was the person that pushed through Laguna Fed’s final home, built in 1961 at 260 Ocean Avenue, now Wells Fargo Bank. A bronze plaque on the façade, to the right of the main entrance, commemorates its construction.  It was very big news at the time, not only for its size and graceful colonial architecture, but that Laguna’s little S&L had become a major player in the county’s financial community.

From the time it opened for business in 1935, Laguna Federal always operated in the black.  When Mills took

the reins in 1957, the association had one branch office and over $30 million in assets.  In 1980, the S&L converted from a mutually owned company to stock owned.  At that time accrued dividends doled out to depositors totaled nearly $254 million.  By 1981, Laguna Federal had 10 branch offices and over $420 million dollars in assets.

In 1982 Mills brokered a merger with San Diego Federal Savings & Loan Association.  There were other, larger, financial suitors that wanted to merge with Laguna Fed, but Mills’ going with the San Diego operation was a clear message to the financial community of her faith in the association.

San Diego Federal S&L later converted to a publicly held savings bank and changed its name to Great American First Savings Bank, which was acquired by Wells Fargo in 1990.  But even during the Great American years, the venerable institution was still referred to as the “Laguna Federal Division.”

So the next time you’re strolling along Ocean, don’t just walk by, but walk in the bank. Take in the sweeping staircase, marvel at the glass-domed roof.  With the exception of the lobby planter that used to be a fountain, it is one of the few buildings in Laguna that remains virtually unchanged.

In 1964, the author, then 7, opened his first savings account at Laguna Federal with a $5 deposit. As a reward for his investment in the community, he received a small gold, metal bank, a tiny replica of the building. 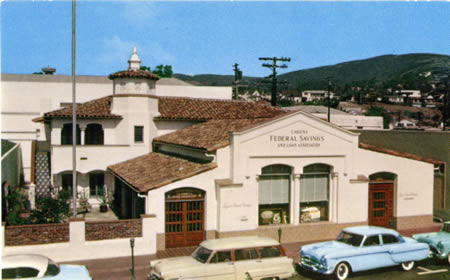