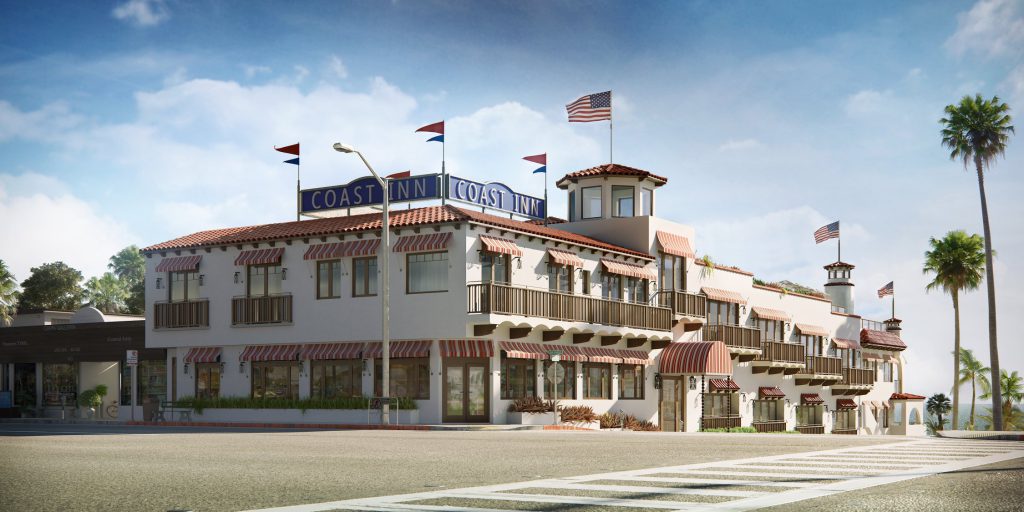 The council ultimately approved the effort on a 4-1 vote, with Councilwoman Toni Iseman dissenting on the effort to revive the historic 24-room property at 1401 S. Coast Hwy.

The deck was pared down to roughly 2,500 square feet, smaller than the 3,707 square feet Coast Inn owner Chris Dornin and architect Marshall Innins had most recently wanted. It will include a bar, pool and spa, but will only be accessible to hotel guests.

Residents like William Fantini expressed concerns about the deck, alleging that it may become a noisy hotspot, intensify use of the hotel and ruin some people’s ocean views with its outstretched umbrellas.

Had the council gone with Coast Inn’s original request for the larger deck, it would have required a special variance from the council, much to the frustration of residents like Fantini.

“Variances should not be the rule,” he said.

Though a majority of speakers for Tuesday’s meeting were against the project, more than 120 emails sent to City Hall were in favor. About 70 other emails were against it.

Mark Fudge called the Coast Inn project “too big of a burden on the neighborhood and on the public. This applicant is going to enjoy all the gravy.”

Cindy Shopoff, who lives near the hotel, had the opposite view.

“We’re very excited to see it remodeled, as it is already operating but not as elegantly as I believe it will be once redone,” she said.

Sam Goldstein alleged that City Hall was burying Dornin in bureaucratic procedures, “which is so unwarranted.”

“What they’ve accomplished here … is absolutely magnificent,” he added. “I applaud them for what they’ve done. It will be another gesture in re-creating what our city’s about.”

Councilman Peter Blake said the Coast Inn needed a world-class amenity like the ocean-view rooftop deck to attract guests to the hotel and incentivize a developer to revamp the aging property.

“It’s not fine dining,” Blake said. “We have to give them something.”

Councilman Steve Dicterow noted that with the deck, the Coast Inn can charge higher prices, which benefits the city with more bed tax revenue. The space will also generate new sales tax.

“I think there’s a direct financial benefit to the city as a whole,” Dicterow said.

The council majority expressed woes about inadequate parking, arguing that if Dornin wanted the council to approve his requested variances he needed to drum up more spaces for guests or hotel staff.

Dornin balked at the notion, contending that parking is inherently a problem for the area and that Coast Inn’s renovation project, as presented Tuesday, will not increase its parking needs.

Blake agreed, downplaying the parking fears. He contended that it’s more common for people to use ride-hailing apps like Uber or Lyft instead of renting a car that needs a parking space. Blake added that if Coast Inn were to get more parking somehow, it would mean taking away parking from someone else.

Resident Ann Christoph recalled how residents decades ago had no say about parking impacts. She alleged the same was true today, “Even though the parking situation is much more difficult compared to then.”

To appease parking woes, the council ultimately charged the Coast Inn a fee, known in city parlance as an “in-lieu” fee.

Dornin, a Laguna Beach native who bought the Coast Inn with his wife Marcella in 2013, said concerns about the deck were overstated. It will not be a “hustling, bustling” spot like La Casa del Camino’s or Mozambique’s, he said.

“I feel like we’re blowing this out of proportion,” Dornin said.

Dornin had sought to build 196 square feet of signage, though the higher amount would have required the council to OK a variance. The council ultimately rejected the sign plan, but allowed the Coast Inn to re-imagine another design for the Planning Commission to review.

Blake said Coast Inn didn’t need big signage because people coming there know it’s a boutique hotel, not a “Motel 6 on the side of the freeway.”

The Coast Inn dates to 1927 and once housed the Boom Boom Room, a nightclub that catered to the gay community before closing in 2007. The club’s space is slated to become a new location of the Bear Flag Fish Co. chain.

Coast Inn’s renovation, originally pegged at $25 million, could be complete in roughly 18 months’ time. The endeavor strives to make the hotel look like its 1930s postcard-perfect self in the Spanish Colonial Revival architectural style, with flags and cupola towers. The renovation will also include a remodel of its 24 rooms.

Discussions and debates about the Coast Inn’s future date to 2015, when the city Heritage Committee reviewed it. Planning commissioners debated it in 2016 and 2017, followed by the council and a special council subcommittee in 2018. Delays this year caused it to get pushed even further back.

The Coast Inn will eventually need a coastal development permit issued by the state Coastal Commission.