After five days of painstaking work to create an intricate circular painting of boldly colored sand, Tibetan monks visiting Laguna Beach brushed their masterpiece into a gray green pile and threw the remainder into the sea on Sunday.

Neighborhood Congregational Church members, led by Pastor B.J. Beu, escorted two of the seven monks to Thalia Street Beach, where their crimson and saffron robes and feather-like headdresses naturally drew onlookers.  Young body boarders in wet suits skipped a set or two out of curiosity to observe the unusual procession and formal dissolution of the mandala.

Earlier during a service, Dr. Lobsang Tenzin led the monks in deep-throated chanting and the playing of instruments as part of the dissolution ceremony, capstone to a week-long visit that began last Wednesday. He explained some of the symbolism within a mandala’s borders, which altogether represent enlightenment. The artwork begun last Wednesday was swept away within hours of its completion Sunday, representing the impermanence of life and artifice of possessing material things.

Though their mission touring in the U.S. embodies demonstrating spiritual values, the monks, from a monastery near Bangalore in southern India, took advantage of their physical location,too. Kayak tour guide Billy Fried took the visitors out for a paddle, which the monks seemed to relish with broad smiles. But they concluded their visit in service, preparing and serving dinner to church members on Sunday evening and for occupants of the homeless shelter on Monday.

“Thank you for blessing our community and our home,” resident Pamela Burrus told the visitors, invited into her home for their stay.

Tibetan Rituals Resolve to a State of Grace

It could only be described as the rolling, guttural, primordial sounds of a human didgeridoo.  Without expression, very little movement or even seemingly breathing, seven young monks in maroon dress and saffron robes stood, eyes closed, before the darkened audience, unleashing deep, tongue-rolling notes unexpected from upright beings.

If they weren’t right in front of you, it would be hard to believe where these ancient sounds were emanating from.  And, like the meditative music of a skillfully hollowed tree limb, it was mesmerizing, even more so considering the sources who had honed these rare, secret tantric chanting skills for more than seven years.

The minister of Neighborhood Congregational Church, B.J. Beu, introduced the performance in Bridge Hall last Saturday night by saying he had heard that this second group of monks to visit Laguna within the past year was the more talented.  At this point, the $10-donation for tonight’s event seemed well worth it.

The monks from the Gaden Jangtse monastery in southern India suddenly disassembled, taking positions on floor pillows, where ornate brass horns that resembled clarinets stood on their bells alongside hand drums, tingsha cymbals and other Tibetan Buddhist instruments.

Surprisingly, the once-serene monks started blasting screeching notes through the horns called dung-chen, some of them telescoping to lengths of six feet or more, banging drums and clanking chimes.  The enthralling earthy sounds of the human instrument crumbled to the cacophony that sounded more like traffic in Mumbai, symbolically epitomizing a country of contrasts where monasteries and ashrams are scattered among abysmal poverty and crowded confusion.

The elder monk of the group, Lobsang Tenzin, a doctor of Tibetan medicine, explained Tibet’s plight, asking for compassion and loving kindness through donations to help the Tibetan people return to freedom.

My first thought was “if they weren’t monks, I’d want my money back.”

Next came the dancing rituals in ornate silk brocade costumes and deity-masks, some of ritual as old as the 7th Century, with familiar-looking, totem-pole-like markings of other indigenous Indian peoples.  With simple and exaggerated back-and-forth steps, the lama dancers crudely acted out the release of anger, obstacles and attachment to emotions, graspings as Dr. Tenzin described them, to make way for a pure state of joy from living in what Buddhists consider the sacred moment.

My next thought was “same dance, different costumes, same noise.”  Which unleashed a state of giddiness not experienced since having to leave a Sunday church service as a pre-teen because I couldn’t “contain” myself.  This time, with some years of maturity, I was able to keep it under wraps, barely.  But the thoughts continued, like, “I watched something similar to this when my daughter was in pre-school. Where’s the teacher?”

Then I heard someone else laughing behind me and, like a silly kid, turned around to see.  It was a monk sitting in the audience, giggly his head off.  That did it for me; I laughed away and even saw a smile or two turn up on stage.

Even so, I wasn’t sure I had made the right choice for the evening’s entertainment, although, in the end, it was pleasant enough.  The next morning I woke up feeling curiously refreshed, new, refreshingly happy for no apparent reason.  Much like a childlike Tibetan monk, I thought.  I literally jumped out of bed, which is somewhat difficult because I sleep on a futon, and was rip-raring ready for more.

So I decided to attend the Sunday morning service at the church, where the monks were in full swing, first chanting like human didgeridoos again and then the ensuing brass and banging cacophony.  But this time, it sounded more harmonious, more fluid, more purposeful, and I got it.  The stirring up of deeply repressed emotions, our internal devils as Buddhists calls it, were let loose through the growling chanting and the released through thunderous musical expression to settle and resolve in a state of grace, ease, lightheartedness.  And lots of smiles.  This is how Tibetan Buddhists put an end to suffering.  It was hitting home.

Pastor Beu summed it up succinctly in this morning’s sermon.  “The blessings come at the end.  All you’ve got to do is show up.”  I was glad I did.  It had become obvious to me that these monks were spending their lifetimes releasing universal “bad karma” and mastering the human condition by uplifting spirits for the benefit of us all. 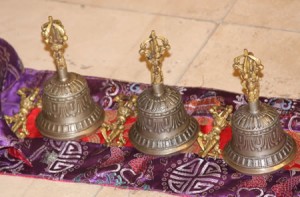 Instruments played during the dissolution ceremony.