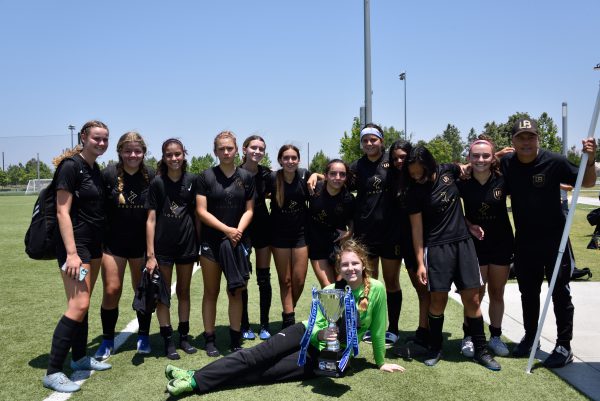 Hindsight is a wonderful thing and timing is everything, so forming a new soccer club in January 2020, just as a global pandemic was shutting down society as we knew it, was probably not the greatest idea at the time.

Fast forward to November 2021 and Laguna Beach Football Club (LBFC) has not only survived, having to comply with Covid protocols and months of individual socially distanced training, but is experiencing levels of success and growth that have far exceeded all expectations.

The initial goal was to get the boys and girls back on the soccer field playing in an healthy and fun environment, and the Coast Soccer League afforded the LBFC teams the opportunity in the Spring of 2021. After solid results LBFC entered some teams into the very prestigious State Cup competition, where games are played against teams from all over Southern California. The Girls 04 and 05 teams went unbeaten and were quickly into the semi-finals. By this time the 04 was decimated by injuries and fell short but the 05 team won convincingly in the semi-finals to find themselves playing for the State Championship. By now it was June and vacations were booked and with several key players missing the girls finished runners up but still an amazing achievement for a brand new club.

By the time LBFC entered the Fall season, the club had grown from seven teams to eleven teams and the coaching staff had also grown.

The LBFC Director of Coaching, Andy Thomas, also back coaching at Laguna Beach High School having coached there from 1997-2004, winning three Southern Section CIF Championships (the only State Championships in the school’s history) and L.A. Times High School coach of the year,  but now also coaching four of the club teams but responsible for ensuring the coaching staff is the best of the best.

Mike Thomas is both the club President and coach of the younger girls program, had directed the club program for six years in Laguna Beach, having also been the LBHS girls varsity coach and now boys assistant varsity coach. Mike brings over thirty years of teaching and coaching experience to LBFC and his goal has always been player development in order for the high school program to experience success.

Max Woodruff joined the coaching staff this season having coached the boys junior varsity team last season. Max played in both the Manchester United and Manchester City academy systems and brings both immense playing and coaching experience to the youth soccer players in Laguna Beach.

All of the coaches hold coaching licenses from Europe and the United States Soccer Federation. They all have degrees in physical education or sports science, and they all have professional playing experience. It’s clear that the LBFC youth soccer players are in good hands and at the time of writing this are thriving within the professional coaching environment. Both G09 and B09 are in second place and battling to win Championships, and the girls 2005, continuing on from their State Cup success are in first place and looking to win the first league championship for LBFC.

If your son or daughter is a serious soccer player who wants to play at the highest level, and enjoy a successful high school career and beyond then LBFC provides the appropriate training environment to achieve that.

LBFC is also running an electronic recycling drive sponsored by Procurri and Ingram Micro from 9 a.m. – 3 p.m. on Dec. 4 at the Laguna Beach Unified School District parking lot. Anyone interested in recycling their electronic devices please swing by, proceeds go to LBFC.