About 20 members of the Boys & Girls Club of Laguna Beach recently put their finishing touch on the renovation of the Assistance League’s Turnabout Thrift Shop, which began last summer.

The kids from the club’s Art Room, aged 6 to 13, artfully applied a rainbow of handprints to panels for the shop’s dressing room doors in a gesture of solidarity for the nonprofit that for years has quietly supported several local programs for children.

Having re-carpeted, repainted and re-imagined their shop with the pro bono help of local architectural designer Ben Simon and his partner, architect Linda Morgenlander, the leaders of the volunteer service organization wanted to dress up the shop’s white dressing-room doors. Since shop receipts support philanthropy directed towards children, “it seemed like a good fit to have the kids involved,” said Ann Hyde, the league’s volunteer spokeswoman.

If you haven’t lately patronized the Turnabout Thrift Shop at 526 Glenneyre St., now is the time to check it out. “It’s an amazing place; clean and beautifully run,” offered a satisfied customer on a recent visit. “I’m here every week and the ladies are wonderful.”

Between the design expertise of Simon and Morgenlander, who kept the renovation costs down by obtaining good deals on materials, and the talents of volunteers, the shop has morphed into an inviting space with visual cues more akin to a boutique than a thrift store.

League volunteers are as organized as they are enthusiastic about their work. Clothing and household items are clean and neatly displayed and volunteers constantly put them back in order. Order reigns even in the donation sorting area, where clothes are steamed and buttons sewn tight before they go on the racks.

Without the telltale musty odors and disarray that typically denote a charity shop, Turnabout Shop organizers remind patrons of their philanthropic mission with a series of framed black and white photos of the special needs children in the league’s early intervention program that tastefully line the walls, supplemented by printed information about their programs at the counter. And now the bright designs on their dressing room doors serve as another bridge between the shop and the kids who benefit from its proceeds.

What’s more, according to league vice president Norma McKibban, the facelift has increased patronage and support. “It’s phenomenal,” she said. “We’ve had tremendous donations. I think they realize their donations are staying in the community.”

Begun in 1976, the league’s free Early Intervention Program provides weekly group-based therapy for parents and developmentally delayed infants up to 1 year. The league underwrites the program’s five counselors and league volunteers baby-sit children while a parents’ support group meets with therapists and are trained to better assist their children.

The program currently accommodates about 20 infants; another 18 are on a waiting list.

Another league program for kids is Operation School Bell, providing backpacks filled with school supplies and clothing to children enrolled in the Even Start program at the Boys & Girls Club as well as two programs in communities nearby. They team up with other Assistance League chapters providing children living at Camp Pendleton with two new school outfits, supplies, and shoes at the start of the school year.

Kids tackling the league’s decorating project painted their hands with bright colors, creating handprint “flowers” connected with painted vines, a metaphor for their growth and development at the club, said the club’s art director, Emily Murray.

The 49-year-old local league has 104 active members, as dedicated to each other as they are to their mission. Hyde, who joined the league 12 years ago, found an instant group of friends. Lynne Vihlene, a 14-year member, volunteers as much as 40 hours a week and looks forward to every minute.

“You have to have a passion,” McKibban said of the work, and members find their niche, whether it’s helping in the shop, holding their favorite early intervention babies, or gathering school supplies.

Simon, who calls the Assistance League and their shop “Laguna’s best kept secret,” learned of the league’s work from a former neighbor and officer, Jo Martin, who mentioned the shop’s renovation needs. “They are such a warm, wonderful, giving group of people,” he said, touched by their recognition of him as volunteer of the year. “It really got to me.”

His enthusiasm for their mission led him to recruit others involved in the renovation to reduce their fees or donate their services, as he did. Accepting payment “would be taking money from the kids,” Simon said.

The shop’s half-price sale is still in progress and hours are from 10 a.m. to 4 p.m. Tuesdays, Thursdays and Fridays, and from 10 a.m. to 3 p.m. on Saturdays. The shop closes in August.

Learn more about the league at http://lagunabeach.assistanceleague.org/ 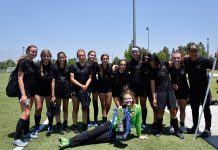