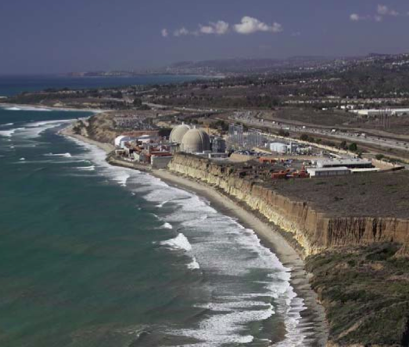 At a press conference afterwards, Jaczko heard a controlled barrage of questions about repairing the plant, which can provide power to 1.4 million homes, as well as about the volatility of the plant’s nuclear waste, referred to as spent fuel rods.

Concerns were raised about the plant’s safety and the “spent fuel piling up there,” especially if an earthquake and resulting tsunami occurred similar to that of Japan’s nuclear power plant disaster last year, said Verna Rollinger, the only Laguna Beach official present at the press conference attended by 45 people, including residents and officials from other cities.

“As long as that waste is there, even if they stop running the plant, we’re not going to be safe,” said Rollinger.

Jaczko’s office confirmed this week that the 4,000 tons of nuclear waste now stored at San Onofre will remain there.

“They are permitted to keep storing it onsite,” said Victor Dricks, an NRC spokesperson, referring to the plant’s operator, Southern California Edison.

“The NRC is looking at whether or not there are benefits to moving it more quickly from the wet engineered pools to dry storage, but that study is not done yet,” said Edison spokeswoman Jennifer Manfre.  The spent rods are held in the wet tank and are moved to dry-cask storage after seven to 10 years, she added.

Edison does not release the exact tonnage of spent fuel now being dry-docked as compared to the amount in the liquid pools due to safety concerns, said Manfre.  “If you think about it, you’ll understand why,” she said.  “We take security very seriously at the plant including all kinds of threats to the plant.” Manfre said the spent fuel needs to “degrade” to a less volatile level before moving it to dry storage canisters.

Manfre said 108 used fuel assemblies are removed from spent-fuel pools at each of the plant’s two units every 18 months, adding that there are 47 filled canisters dry-docked there now.

With a reported eight million people living within 50 miles of San Onofre, concerns were expressed about the “wasteland that would be created over much of Orange County should there be a Fukushima-type spill,” said Rollinger.  “It’s not like a fire or a flood where you can clean up and rebuild.  In terms we can understand, the disaster is pretty permanent.”

Also this week, scientists from California State University at Long Beach reported that radioactive iodine released from Japan’s damaged nuclear reactor last year was found in local kelp a month after the Fukushima meltdown 8,000 miles away. The study determined that the largest concentration was found to be 250 times greater than levels in kelp prior to the accident.

No one at the meeting asked for the San Onofre plant to be relicensed, safe or not, when renewal comes up in 2022, Rollinger said. “At least not until we know what to do with the waste,” she added.

In a letter last month to Edison outlining required steps necessary before the plant is restarted, the NRC demanded that the utility correct “unusual wear on steam generator tubes” that caused the plant to shut down two and a half months ago. A resulting small radioactive gas leak was due to thinning steam-generating tubes inside the reactor that were installed only two years ago, according to Edison officials.

“Until we are satisfied that has been done, the plant will not be permitted to restart,” NRC Region IV Administrator Elmo E. Collins said in the letter. Inspections found unusual wear in numerous tubes of the two nuclear generators, the NRC report says. Edison reported that the early wear on the tubes was due to vibration causing the tubes to rub against retaining bars inside the steam generators.

The damaged tubes were replaced with many others being plugged, according to Edison. Each of the two generators houses 9,727 steam generator tubes. The cause of the vibration is being investigated, said Manfre. “They know the tubes are rubbing together,” she said, “but why are they rubbing together?”

In February, Laguna Beach’s City Council voted 4-1 to appeal to the NRC to enforce stricter safety measures at the plant.

Rollinger said conserving energy on an individual basis can reduce the need for nuclear power.  “I don’t think we can count on that energy from that source for the foreseeable future,” she said. “If San Onofre was shut down tomorrow and there was still a high demand for energy, I believe that some enterprising entrepreneurs would start producing environmentally friendly energy because there’s money to be made, especially in this economy.”

Rollinger suggested several ways to reduce energy usage, such as shutting off power strips and TVs providing background noise. “If it meant whether you’re going to have a light to turn on at night so you can read,” she said, “you might be more careful during the day.”

San Onofre was closed by Edison to prevent a main steam line break, according to the NRC letter. According to activists, that indicated the potential for a meltdown.

“We don’t need their dangerous and outdated machinery to meet our energy needs no matter how hard they try to convince us that we do,” said Gary Headrick, founder of San Clemente Green, a group devoted to sustainable practices that is advocating for San Onofre’s shutdown.

Headrick requested the meeting with Jaczko last week and was asked to lead the discussion at the press conference. “We were here to give them a chance to begin to repair their image,” he said.

Rollinger said there were “a lot of controlled emotions.”