For many, a fresh approach to nutrition tops the list of New Year’s resolutions. But eating healthy can be intimidating if you don’t know where to start, especially with the wide range of special diets that are popular today. While no one lifestyle fits all, Laguna’s personal chefs are in agreement that any heightened awareness about the food you’re consuming is beneficial. These culinary experts share the pros and cons of five different dietary approaches from Paleo eating to veganism, so you can pick the one that can help you achieve the goals you’ve set for 2016.

Often regarded as the “caveman diet,” Paleo eating is more than this erroneous stereotype. “No one’s saying you need to live in a cave and skin your own animals,” says Nicole Hellendoorn, founder of private chef and meal preparation service California Paleo Kitchens. “It’s more about having a connection to where your food comes from and eating things that nourish your body.” With a focus on vegetables, clean proteins and healthy, natural fats, the Paleo approach involves only consuming foods that were available during the Paleozoic era; this means eliminating grains, legumes, soy, dairy, refined sugars and processed items.

“We should be eating foods that are more compatible with our immune and digestive system,” Nicole explains. “Evolutionarily, we haven’t changed as people much since the Paleo era, but our diets, food process, agricultural process and food supply [have] changed tremendously. The thinking with Paleo eating is that if we get back to the more natural food-based approach that our bodies are used to and engineered for and have evolved to thrive on, then we’ll be increasing our health overall.”

To start, Nicole advises doing a full pantry clean-out to get rid of any processed foods and swap out fats like canola and vegetable oil for high-quality extra virgin olive, coconut or avocado oils that are stable at a high heat point. Consuming the “right fats in the right amounts” will actually improve your cholesterol and cardiovascular health. “Your brain is not bone [or] muscle, it’s actually mostly fat,” she explains. “It needs cholesterol to function.”

And while Paleo is often associated with an overconsumption of meat, Nicole advises augmenting with more vegetables. Leafy greens like kale and collard and mustard greens are high in calcium and can replenish what’s lost when cutting out dairy; other substitutes can include cashew, almond and coconut milks. “[Paleo] changed my relationship with food,” says Nicole, who’s been on the diet for six years. “[It] has allowed me to maintain a healthy weight, to feel better, to have better energy levels [and] more restful sleep. … There’s a vibrancy to me that wasn’t there six years ago.”

On the other side of the spectrum, vegetarianism eliminates meat consumption entirely, sticking to a plant-based diet that excludes red meat, poultry and fish. Exceptions can be made, however, as some vegetarians continue to eat seafood, while others eliminate dairy products as well. Veganism is the most extreme form, cutting out all animal products and by-products, such as eggs and milk.

Local personal chef Evan Lewis was a vegetarian for three years and says the diet can have tremendous health benefits when it does not include processed goods; a number of studies have shown vegetarians are at lower risk of heart disease, high blood pressure and some forms of cancer. “I would not try to reinvent your meatloaf with a wheatloaf,” says Evan, who helms catering company Evan’s Gourmet. “I would start with whole foods.”

Raw vegetables are one example, and Evan recommends trying to eat an assortment of colors, as each shade represents different underlying vitamins and minerals. Produce should be bought locally and in season, as she says the items won’t have traveled as far and contain more vitamins from local environments; buying honey at the Laguna farmers market, for example, could help with allergies because the bees have procured pollen from around town. Another way to capitalize on vegetables’ nutritional value is by using them in soup: “Anything that gets cooked out falls into the pot, and you’re ingesting it in the broth,” Evan says.

Of most concern for vegetarians and vegans, however, is a lack of protein, which Evan says can be achieved through a traditional Mexican side: Together, rice and beans make a complete protein containing all of the essential amino acids. Chef Kim Wilson, whose company Pinkiwi Culinary Production often caters in Laguna Beach, says nuts and grains are also high in protein, as well as an unlikely vegetable: broccoli.

Kim Wilson says vegans can head to The Stand to nosh on the potato plate, or Zinc Cafe for the avocado salad and Zinc Sunrise drink made of orange, peach and raspberry puree.

And though reconfiguring your diet can often result in cravings, Evan says they may not always be bad: “If you’re craving ice cream, maybe … it’s that you need some calcium in your diet.” Try drinking a glass of skim milk to see if that hankering for a sundae goes away.

Getting Rid of Gluten and Dairy

While the previous three approaches can be leveraged for weight loss, gluten- and dairy-free diets are much less about the scale. A mixture of two proteins found in grains, gluten is responsible for dough elasticity; those with celiac disease (an autoimmune disorder) are predisposed to small intestine damage when it is ingested, while gluten sensitivities can cause fatigue and headaches, among other symptoms. “I firmly believe that gluten-free is not a diet, it’s a lifestyle,” says Christine Anenberg of local personal chef service Christine’s Meal Makeover. “Unless you have a true gluten sensitivity or celiac disease, it really can’t do anything beneficial to you.”

Processed foods labeled “gluten-free,” for example, often contain more sugar and calories; plus, a 2010 study by the American Dietetic Association found that about 40 percent contained gluten cross-contamination. Those looking to cut carbs can instead focus on whole grains: Trade white and wheat flours for quinoa and brown rice flour, which are both gluten-free. Another replenishing replacement is brown rice pasta, with a higher fiber content that controls blood sugar, Christine says. She also notes that switching to whole grains can benefit those looking to increase their metabolism.

Similarly, eliminating dairy in a diet is often most amenable to those with lactose intolerance or sensitivities, though consuming less can prove beneficial to others as well. “I’m not lactose intolerant, but I do notice when I eat ice cream at night or [have] … something with a lot of cream, I’m not going to feel good the next morning,” says Alan Miller, a local personal chef who also works in the kitchen of California Zephyr Railcar Charters. “Having asthma, if I have a lot of dairy, I can feel it in my lungs.” Some medical professionals believe dairy may contribute to constipation, and it is estimated that up to 70 percent of the world’s population suffers from some degree of intolerance. In recent years, Alan has adopted a more Mediterranean approach for lighter, healthier eating. He uses cream of coconut in dishes that call for heavy cream, for example.

Whichever approach you take, remember that a well-rounded resolution involves more than just meal planning. “I’ve heard that it’s not about the food,” Christine says. “It’s about what’s going on inside. Make sure that you’re feeding yourself not just nutritionally but mind, body and soul.” 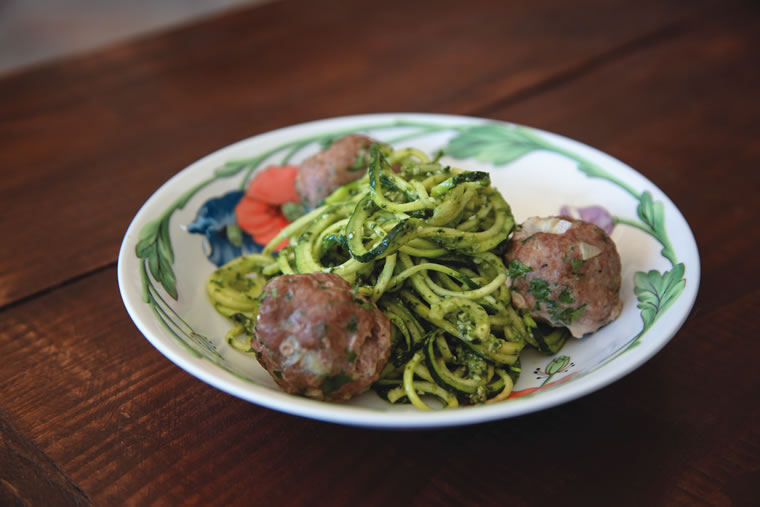 Parmesan cheese, to taste or omit

Preheat oven to 375 F. Line a sheet pan with foil. In a skillet, heat oil over high heat and cook onion until translucent. Add garlic and saute for 1 minute. Transfer to bowl and mix in all other ingredients. Roll into golf ball-sized balls. Place on sheet pan and bake for 20-25 minutes until browned and cooked through. Add to zucchini noodles.

[Editor’s Note: The print edition of this article lists the amount of grated Romano cheese as 1 cup; this post has been updated to reflect the correct amount of 1/4 cup.]