“If you want a moose, you have to go where the moose are!”

At last week’s dinner honoring Toni Iseman, Hallie Jones revealed Toni’s advice on finding a man–shared in a girl-to-girl conversation between serious agenda items related to preserving Laguna Canyon. But Hallie, the executive director of the Laguna Canyon Foundation, extrapolated that advice to achieving many goals. “Keeping your eye on the goal,” always holding in mind the big picture of what you’re trying to achieve—”that’s where you’ll find success.” 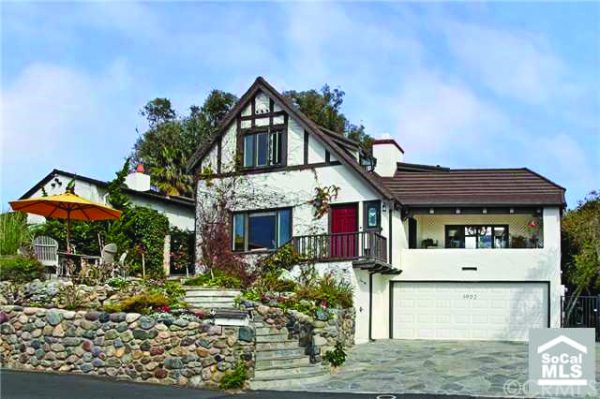 Earlier in the week, we were sitting through a long city council meeting to the very last item, an appeal of an administrative design review decision. Staff had approved changes to a 1929 Normandy Revival house at 1902 Ocean Way that would transform its appearance entirely. An example of letting the goal slip away once again. Eyes were diverted from keeping Laguna’s charm and uniqueness, its historic character, to discussions of the validity or invalidity of a list of historic resources and whether we resident speakers had the qualifications to opine on the historic value of the house in question.

But the real estate description says it all, “This incredible Norman Revival Tudor-style home sits high on a knoll…With only two owners since built, this historic storybook home has been meticulously renovated and maintained…this home is beyond charming!” What did the real estate people see that four city councilmembers couldn’t?

What is proposed to be done to the “incredible Norman Revival historic storybook” home?

The characteristic hand-troweled stucco, half-timbered wall surfaces are proposed to be removed, and windows and doors are to be enlarged and replaced throughout. To achieve all that, will we see another “down to the studs” remodel?

“Beyond charming” will be changed to “beyond recognition.”

The previous Council bungled the city rules badly, deleting references to the 1981 Inventory of Historic Resources from the Historic Preservation Ordinance, and inventing confusing new methods of determining a historic resource. Yet they also provided for historic resource assessments, funded by the City.

This should have been an easy call for the Council. If they were still unclear about the historical status of this property, they could have called for an assessment report to inform their decision. Yet despite their stated uncertainty, they ordered no report and allowed the proposed changes to go forward by denying the appeal.

The role of our Council is primarily to safeguard our town—not only from fire, flood and crime, which can be well managed by trained professionals—but to assure that the treasure that is Laguna Beach is not damaged or lost. This is where we need sensitive discretion and sound judgment. These are the qualities candidates always convince us of during campaigns.

Now we need these councilmembers, men and woman, to think of “where the moose are,” where the important aspects of Laguna Beach that need to be protected are, and set about strongly accomplishing that protection.

Houses like this can disappear or be transformed one by one, and pretty soon, it’s the Laguna Beach that was that we are pining after.

Ann is a landscape architect and former Laguna Beach mayor. She’s also a long-time board member of Village Laguna, Inc.

Letter: What is the Value of the Ocean to Laguna?