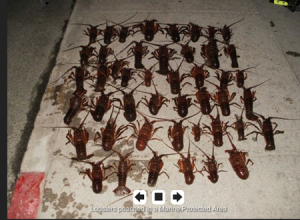 From their patrol boat, Department of Fish and Game wardens observed Marbel A. Para, 30, of Romoland, Calif., and a companion diving after midnight in the Laguna Beach State Marine Reserve beneath Heisler Park, an area closed to fishing for years even prior to the recent expansion of sanctuaries along most of Laguna’s coastline. Fishing is now prohibited altogether between Irvine Cove and Table Rock Beach.

In addition to illegally taking the lobsters from an MPA, the divers exceeded the legal possession limit of seven lobsters a day per diver, and all but five were undersize. Para claimed that all the lobsters were his, and his companion was not cited, said DFG Assistant Chief Paul Hamdorff in a statement.

“The vast majority of our fishing and diving constituents are responsible and law-abiding,” he said. “It is always our goal to catch those who choose to intentionally abuse the resources of this state for their own benefit.”

Longtime Capo Beach lobster fisherman Rodger Healy agreed. “On a clear night, they went by 100 divers,” he said of the patrolling wardens. “It will be easier to distinguish a legal person from a poacher,” said Healy, as local diving activity has dropped significantly since Jan. 1, an indication of the number of divers hunting lobsters and spear fishing.

Nevertheless, Laguna’s Mike Beanan, an ocean advocate and participant in MPA hearings, doesn’t expect such enforcement actions will become routine. “There are people watching the water,” he said, referring to residents with ocean views, as likely to report a marine violator as a prowler. Marine violations can be reported to a DFG tip line, 888-334-2258.

In addition, volunteers, including recruits among Laguna’s Bluebelt supporters, began monitoring and recording what beach-goers are up to within the county’s seven marine reserves. They note kayaking to sand castle-building to fishing violations twice a month in 35 locations, said Ray Hiemstra, associate director of Newport Beach-based OC Coastkeeper, a water-quality advocate. The first quarterly report of MPA Watch, being compiled now, may provide guidance to regulators on where to deploy resources, he said.

The new reserves, created under the Marine Life Protection Act of 1999, are intended to strengthen existing reserves and regulations to allow recovery of fish populations in decline.

Wardens cited Para for several poaching violations including unlawful take and illegal possession of lobster, and possession of overlimits and undersized animals. A report will be filed with the Orange County District Attorney and Para may face additional charges related to this case.

All the lobsters were returned to the ocean.