“Whenever you see him on his bike, he’s always smiling,” said his father, Richard Lucidi, who said cycling is “first nature” to his son.

Massimo started dabbling in sport as a swimmer, but discovered the joys of street riding with a family friend and his father. Richard Lucidi and his son together entered the 60-mile annual Solvang Century ride in 2010. Despite high winds, his son had no trouble at all, said Lucidi.

About the same time, another family friend and avid cyclist, Dennis Barcelo, began riding with Massimo and urging him to amp up his training, ultimately leading him to pursue the sport competitively. “Dennis is like my hero,” said Massimo. “He’s a great coach for me.”

Barcelo encouraged his young protégé to enter a time trial in November 2010. There, Lucidi and Massimo ran into another father and son duo, Jeff Shein and his son Michael, 13. Shein, who leads the Irvine cycling team, signed up two new recruits.

With the Sho-Air team over the past year, Massimo rode in team races, road competitions, time trials and 55- and 102-mile hill climbs in Death Valley and near Mt. Whitney, involving 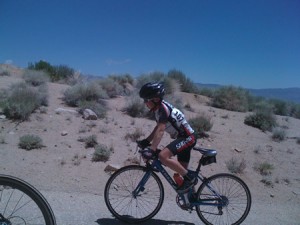 ascents of 13,400 feet and 14,500 feet, respectively. He was the only kid to complete the 100-mile ride last year at the Solvang Century. “This is when he started leaving me behind,” his father said.

During the recent winter break, Massimo pedaled to Palos Verdes and San Diego and ascended towards Mt. Baldy on the Glendora Mountain Road, a favorite of cyclists.

Though a cycling aficionado himself, Lucidi’s work as a local builder permitted little free time for the sport. With his son involved, he’s on the road more often.

Together, they also maintain and tinker with their bikes. Massimo currently rides a Fuji Supreme SL, whose carbon fiber frame they found on eBay. They scrounged the rest of the parts “here and there,” and cobbled it together with the help of Barcelo.

Massimo thrills to the whole package: He loves the personal challenge of fine-tuning his motor skills, increasing his speed and endurance, as well as strategizing with team members. Whether racing or just hitting the open road, he said it’s a friendly sport where you meet new people. Then there’s that visceral feeling pushing the peddles and feeling the gears shift. “If you buy a bike, you have to ride it,” exclaimed Massimo. “You can’t just let it sit around and rot!”

After a recent weekend training camp, the boy’s face lit up as he described new-found knowledge: how to maintain balance on a bike while leaning over to retrieve a water bottle, or proper nutrition for training. He explained the importance of bike control skills in avoiding collisions with close-packed teammates and being able to react to unexpected obstacles when sharing the road with cars.

Such skills training will serve Massimo well as one of the youngest members of Sho-Air’s 13-14 year old team when the 20 members enter the Mothballs criterium near Santa Barbara on Jan. 29, racing for 30 minutes around a closed circuit in close quarters.

His future aspirations include riding in Belgium, considered the Shangri-la of road cycling, and eventually entering the Tour de France.

In the meantime, Massimo will never get too much of the ever-changing scenery when he’s out cycling. “It takes me places,” he said. “It’s freedom.” 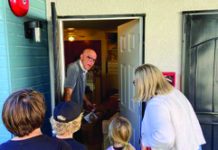