The Laguna Beach City Council voted unanimously Tuesday night to move forward with creating a public art concept at the long-awaited village entrance, allocating an additional $100,000 from the city’s art-in-lieu fund for a $180,000 artist honorarium.

Staff said groundbreaking on the full project is just months away, once summer crowds abate after Labor Day, Sept. 3. City Manager John Pietig estimated the entrance will open by June 2020. 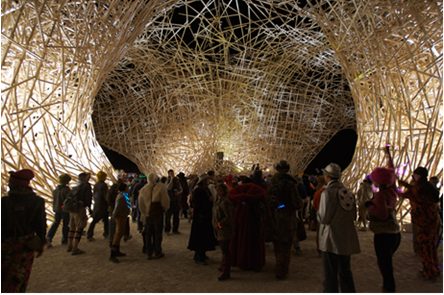 Cultural Arts Manager Sian Poeschl presented the Arts Commission’s proposal for a public art concept that would act as a bandstand or pavilion where people can gather and meet before going to festivals, or where small-scale events can take place during the off-season.

The two locations under consideration are just north and south of a driveway from Laguna Canyon Road to the parking lot near the historic sewer digester building. The entire area is within the city’s downtown specific plan and the civic art district.

The commission is recommending three internationally known artists, Mark Fornes, Arnie Quinze and Janet Echelman, be invited to develop proposals for the project. Poeschl said later that the three artists named will not necessarily be the ones who are solicited, but that the arts administrator will invite artists who work in a specific style, rather than hold an open call for artist proposals. The invitation-only approach and the public art honorarium, the largest ever awarded, are both city firsts, Poeschl said.

Not everyone in the audience was enthusiastic. Several public speakers urged the Council to proceed with caution.

Resident Reuben Flores said artistic benches rather than a large-scale artwork are more appropriate for the site to ensure its identity in a canyon setting isn’t lost.

Ann Christoph, a landscape architect who earlier submitted a design scheme for the entry beside City Hall, echoed Flores’ concerns, saying she wished for more collaboration between the arts commission and those developing the project. “I would hate to see something that screens off the digester or conflicts with the look of it, or conflicts with the natural feel we’re trying to have in the canyon,” Christoph said.

Resident Rosemary Boyd questioned the city’s funding priorities, putting public art ahead of preservation of the historic digester tower located amid the entry parking area. “It concerns me that we’re thinking about some shiny new project that may be oversized and out of scale for Laguna Beach when we have an orphan digester building sitting there that we feel that we don’t have the money to develop and use,” Boyd said. “If we need venues for various things, why can’t we get the money to do that?”

Boyd also questioned why the commission suggested enlisting international artists to create proposals.”Why aren’t we using our town artists to do these things?” she asked.

Art Commission member Donna Ballard said the project will be appropriately scaled to the size of the space, and that she believes the digester is a separate issue. “This is the village entrance, and we need something more than just benches in there,” Ballard said. “This is the civic arts district; it’s not the pristine area of the canyon,” she continued.

Though she ultimately cast her vote in support, Council member Toni Iseman pointed out that the undetermined potential use for the digester building could influence the location for the art installation.

In addition to approving the public art concept, council members appointed Mayor Kelly Boyd and Council member Bob Whalen to serve on a subcommittee with members of the arts and planning commissions to establish design guidelines and eventually review proposals.

Whalen recommended a preliminary consultation with the full Council about the site location for the artwork before soliciting proposals from artists. Boyd agreed.

Poeschl said a good starting point would be for the subcommittee to determine some guidelines and expectations for designs and bring those back before the Council before reaching out to artists. The art installation would not occur until the project is complete, she said.