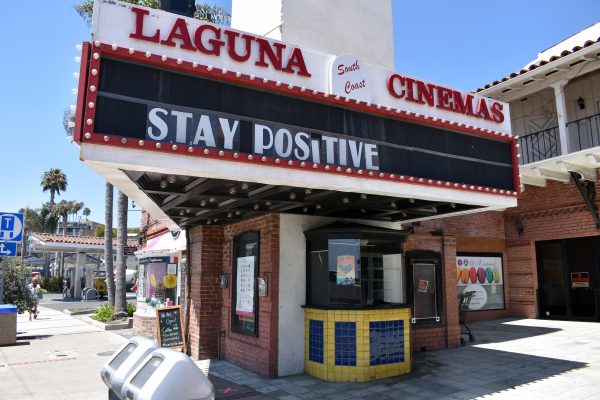 By Bradley Zint I

An electric car company is looking to renovate the historic Laguna South Coast Cinemas theater into a new public-serving venue.

Rivian, which has an office in Irvine and others throughout the U.S., would supplement its renovation of the shuttered South Coast Highway business with a marketing component about the car brand, the company explained in a presentation to the city Planning Commission on Wednesday.

That component would mean a permanent display of two Rivian models—though not set up as a dealership—as well as other educational components, according to the company’s proposal.

That display, however, would be small compared to everything else Rivian has planned: a theater that could accommodate screenings, live performances and lectures; a public courtyard; conference space; and an ocean-view patio made from an area formerly used by the theater projection room.

Retail, food and beverage operations of Laguna-based businesses are also envisioned. A vacant apartment on the second story could be used to house an artist-in-residence.

“It’s a really amazing, iconic property,” said Denise Cherry, senior director of design, facilities at Rivian. “It’s a great way [for Rivian] to give back to the community by putting down roots.”

South Coast Cinemas as it is known today dates to 1935, when the venue, built in the Mediterranean Revival style, opened as the New Lynn Theater. It had a long cinematic run until closing in 2015. At that time, it had two screens with 674 seats. Rivian’s plan would pare down to only one screen with 130 seats.

Though it has no official historic designation, planning commissioners said they wished to see the theater restored under state or federal historic renovation guidelines—a proposal Rivian said it was open to.

Cherry said the renovation aims to stay aligned with the Mediterranean Revival style. They want to restore brickwork, shutters, the original Edgar Payne murals and theater marquee, among other aspects.

Cherry said reviving South Coast Cinemas is a “passion project” for her company, which is in the midst of buying the property.

Commissioner Jorg Dubin said he was excited to see the theater also be an event center.

Commissioner Anne Johnson said she appreciated all the concepts presented—except for the two Rivian models inside.

“Couldn’t you do this with pictures and slides [of Rivian products] … without having two big vehicles?” she asked.

Cherry replied that their concept is about consumers being able to enjoy “the inherent beauty” of the cars, touching and exploring them up close.

Chairwoman Susan Whitin compared Rivian’s marketing concept to a Tesla showroom. She said she appreciated how Rivian’s ideas and values coincided with Laguna’s.

As for the project, “It creates a lot of possibilities that don’t exist. It feels energetic. I think it’s a good use.”

Rivian hopes to re-open the theater by 2021. It next requires review from the city Heritage Committee before returning to the Planning Commission, possibly later this year.