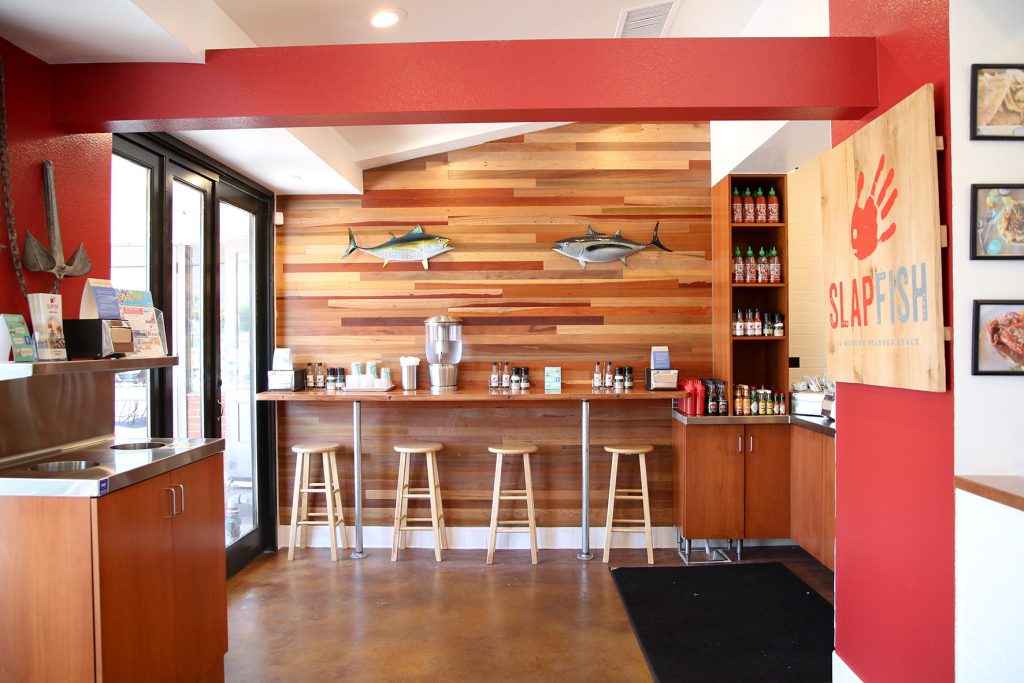 Branded as a “modern seafood shack,” Slapfish swims into Laguna Beach with its fresh-from-the-sea cuisine.

From food truck to gastronomic empire, Slapfish is literally taking the world by storm. In just a few short years, the restaurant has grown from a food truck roaming the streets of Southern California in 2011 to its second OC location in Laguna Beach in May to an international franchise with locations set to open in the Middle East, including Dubai. “We definitely weren’t expecting it,” says owner and chef Andrew Gruel about expanding overseas.

And it seems like “unexpected” is a word that has come across Andrew’s table more than once since he’s headed up the burgeoning eatery that opened its first brick-and-mortar restaurant in Huntington Beach in 2012. Take, for instance, the surprising combination of clam chowder and french fries, which Andrew dubs Chowder Fries. This “happy accident” came into fruition a few years ago while Andrew was running the Slapfish food truck at the OC Fair & Event Center and had an unforeseen flash of hungry diners. During the mad rush, he threw together the fries and chowder, and the combo took off.

While the food truck is no more, its magnetism has kept going strong, bringing it to Laguna Beach. And it’s the perfect fit for our seaside town, actually. Since the restaurant is a proponent of sustainable seafood (it has a partnership with Aquarium of the Pacific in Long Beach), ocean-minded diners can rest assured that each bite is ecologically approved. “We can provide people high quality but not break the bank,” Andrew shares of the fare, which is mostly under $10. “… You can just have flip-flops on, but have high-quality seafood.” That level of approachability, which is perfect for the laid-back, seafaring community of Laguna, has melded well with patrons. Walk into the locale in the courtyard on the corner of PCH and Broadway and find a simple setup that’s meant for “grab ’n’ go.”

Diners who prefer to sit down, however, whether in the courtyard or in the bar seating indoors, might want to start with an appetizer, such as the aforementioned Chowder Fries—crispy fries smothered in creamy clam chowder and topped with bacon—or the fried pickles served with Awesome Sauce, a house-made, mayonnaise-based sauce with smoked pepper. Next, after diners’ mouths are uncontrollably salivating, they can bite into the star of its dishes: the seafood. A must-try is the lobster roll, made with 100 percent, juicy, plump Maine lobster, which is served between a buttery roll with a dash of mayo and lemon, and its signature Slapfish potato chips. Or, try the hake, mahi or shrimp, served up in a salad or in a taco. Choose one of its many flavorful house-made sauces, including the Awesome Sauce, Jersey (creamy lemon-herb), Rooster Cocktail (Sriracha-spiked cocktail sauce) and more, to complement your dish.

The addition of Slapfish to Laguna’s culinary scene is a great one. Whether it’s grabbing a bite to eat after a day at the beach or a late-night snack, Slapfish makes outstanding seafood accessible to anyone at any time.