The Laguna Beach High School spring sports season is winding down this month and will switch to summer mode very soon. Fall Sports will be back in early August but a number of returning athletes will be in high level competition this summer.

Breaker girls finished 26th in Division 1, the top of the four Southern Section CIF divisions and Jana Jocic returned to the pool to finish fourth in the 100 Breast (1:04.09) and qualified for the State Championships to be held this weekend at Clovis West High School near Fresno. Laguna’s 200 Medley Relay of Addie Hudzinski, Jana Jocic, Ava Knepper, and Myah Pinto finish 14th with a 1:49.32 and a new school record time at the meet held at the Marguerite Aquatics Center in Mission Viejo. Earlier they broke the old record of 1:50.62 set last season in the preliminaries with a time of 1:49.52.

The Boys ended 25th with 17 points thanks to Chase Shipp finishing second in the Division 1 Dive meet on April 27. He was not selected for the State Dive finishing seventh at the qualifier with only the top six in the Southern Section making the cut.

The talented runner Melanie Falkowski finished third in the 3,200 meter run (11:10.24) at the Division 3 prelims held at Estancia High School last Saturday and became the only Laguna athlete to advance to the Division 3 finals on Saturday at Moorpark High School in Ventura County. The senior was the Sunset Surf League Cross County Champion last Fall and as expected has made an impact in Track for coach Steve Lalim.

Looking for the latest Laguna scores, rosters, and schedules? Go to the department website at lbhs.lbusd.org/athletics/teams for the updated schedules and where the scores get posted first for all levels!

Laguna held their spring signing assembly on May 4 and the following is the list provided on those that were scheduled to attend and their college selection:

Men’s Volleyball: Sam Burgi ’18 was credited with sparking UCLA (22-5) to a quarterfinal win over Pepperdine in the NCAA Men’s Volleyball Championships. The Bruins finished third after a narrow five-set loss to Cal State University Long Beach in the semi’s on May 5. 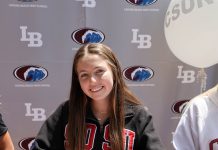 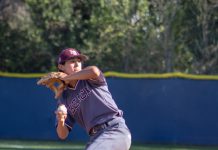 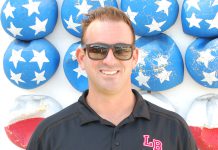