By Brian Lopes and Richie Schley

Adventure is something different for everyone. For freeride mountain bike legend Richie Schley it’s the element of surprise with just enough information to make it through safely. For mountain bike world champion Brian Lopes, it’s being prepared and challenging yourself to reach a goal. With the aid of long time friend Dave Wonderly, the trio set forth to tackle the 22-day trail in Baja, Mexico, recently. Wonderly’s wealth of knowledge about the trail was to be the team’s compass.

So the adventure began with the three Laguna Beach amigos biking Baja sea to sea!

Spend three-days crossing the Baja Peninsula, from East/Bahia de Los Angeles on the Sea of Cortez side to West/Punta Maria on the Pacific Ocean side. These three days would be to get familiar with the terrain and take photos and video documenting the adventure for Outside TV, take a rest day on the beach, then attempt a one-day push back across the same route. The show’s host Pat Parnel was on location as part of the support team for the three amigos, along with Bill “The Photog” Freeman, Devin “The Videog” Schmitt and Jon “The Snake Charmer” Levey.

Be the first mountain bikers to cross the peninsula via the 22-day trail; an 80.3 mile motocross trail crossing with 7,400 feet of elevation of loose cactus-filled, isolated hot terrain.

The adventure crew set out to make the 13-hour drive down to Bahia de Los Angeles, where Bill and Linda Walton hosted their night to prep for the East to West three-day start. 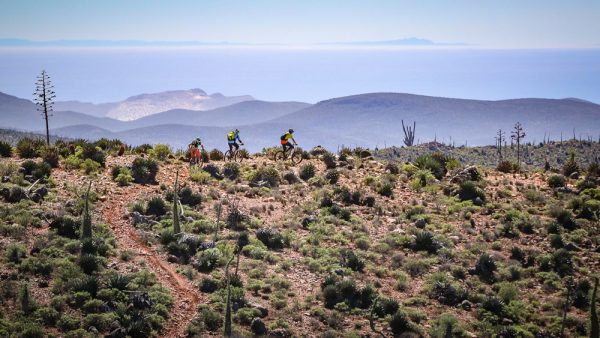 Spirits were quickly deflated by the ruggedness of the loose, rocky and hike-a-bike trails encountered throughout the 90-degree heat on Day 2. After nine tough hours of dodging cactus and searching for shady spots to rest, the trio reached the Pacific exhausted and less confident about their one-day push back across. Setting up camp 50 feet from the ocean, the trio swapped stories near the campfire, recovering with a good meal, plenty of fluids, and time off their feet. 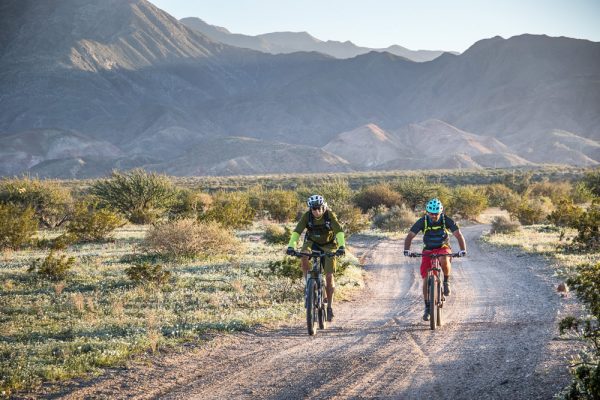 Unzipping the Poler tents to views of crashing waves was a good way to start this rest day. After Seaworth Coffee and breakfast, Wonderly and Lopes began a thorough prep of their Ellsworth Rogue 40 bikes, while Richie grabbed his SUP and hit the waves. As the day progressed, Lopes continued his prep by setting up his computer to keep the pace on track for success, while making sure he had just the right foods and quantities to keep him fueled for the journey across. As Lopes prepped like it was a race, Richie took notes, “take salt pills every 30 mins, so you don’t cramp, drink constantly, eat constantly, don’t get your heart rate up too high and don’t stop unless you have to.” The mood was getting more serious as the day went on. 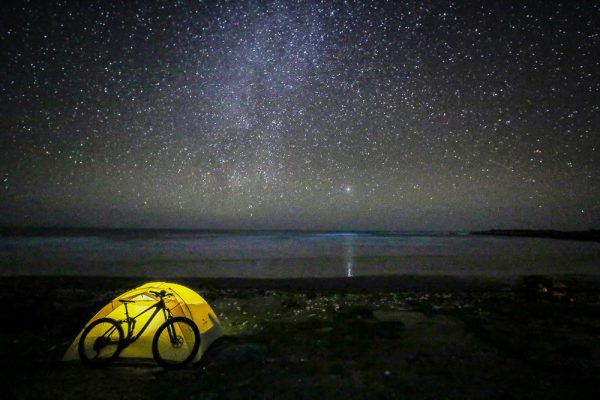 The Ride or Die day was about to begin even before the sun had woken to shine light on the trail or heat up the desert. At 5:45 a.m., the amigos rolled out of camp, their plan was to stay together until they got to the highway crossing about 30 miles away, but Lopes was out of sight within 10 minutes. Temperatures were cooler, a welcomed gift as Wonderly and Richie forged an alliance and Lopes embraced the journey solo. The sand whoops formed by dirt bikes and loose, steep climbs proved that the hike-a-bikes were even more brutal in this direction. Mile 28 was the highest point of the route, hitting 2,160 feet of elevation. Its pay off was seven miles of descent, followed by 35 miles of relentless punchy ups and downs and 10 miles of pavement to get to Bahia de Los Angeles. After nine hours in the saddle, Lopes crested the last rise to the most beautiful view of the Bahia de Los Angeles. A short downhill and Lopes accomplished the goal, crossing the peninsula, 80.3 miles, 7,418 feet of climbing, in nine hours and 13 minutes.

Cleaned up and starting to feel recovered, Lopes still wondered if Richie and Dave were going to arrive before sun down. With about 45 minutes until sunset, two hours after Brian had arrived, Richie and Dave arrived, making the crossing a full success.

The trio basked in their joy of completion of a goal set and achieved under the Mexican sun. Toes in the sand and lungs filled with salty air, they had each created their own version of adventure along the way. Baja is a special place, filled with beauty and adventures to be had. Go get yourself some! 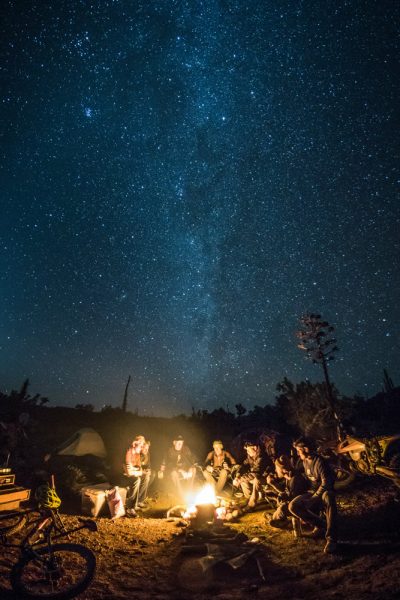