The tags, which cost from $1,700 to $3,000 apiece, track how far the sea mammals travel, how long they’re out of the water, the depths and duration of their dives as well as the salinity and temperatures of the water, said Keith Matassa, executive director of the rescue center. The tags will provide data to help National Oceanic and Atmospheric Association researchers uncover the mystery behind an epidemic of emaciated sea lion pups rescued since January, said biologist Robert DiGiovanni, who supplied the tags to PMMC and is monitoring the data.

Two more pups of four total that will be tagged are ready to return to the ocean, said PMMC’s director of animal care, Michele Hunter.  Their release was scheduled for this past Thursday, she said.

The first two to wear satellite tags, named Jimmy and Manny, were released a month ago and headed for the south end of Catalina Island.  The two pups have since traveled far from where they were found.  Jimmy, rescued on Jan. 20 at Cotton Point in San Clemente, was last tracked off the coast of Long Beach.  Manny, rescued on Jan. 23 in Irvine Cove, took the fast track and traveled about 250 miles to San Luis Obispo, 150 miles in two days, said Matassa.  “A sick animal wouldn’t be able to travel that distance; they have to be thriving out there,” he said. 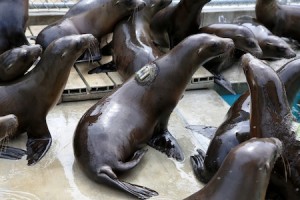 The data from the four tagged sea loin pups will tell the center if they’re staying close or traveling normally and finding food, Matassa said. This preliminary information, DiGiovanni said, indirectly indicates that the first two tagged pups are getting enough to eat.

The pups, which come to the center listless and skeletal-like at 20 pounds or less, are being released weighing 10 to 20 pounds above the 60-pound average weight for their age. The extra fat gives them a jumpstart to survive back in their habitat.  The next two tagged releases, Martha and Roscoe, were rescued on Feb. 20 and March 8 in Newport Beach and Crescent Bay, respectively.  Of the 315 starving and dehydrated young pinnipeds rescued along the Orange County coastline so far this year, the center has released 52 rehabilitated pups.  Only one returned to shore due to exhaustion after traveling to Santa Barbara in a month and half, according to Hunter. 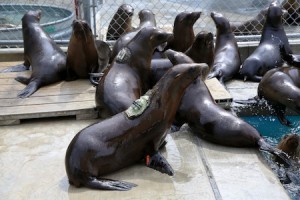 The satellite tags, glued with low-heat epoxy to the animals’ fur between the shoulder blades, are expected to stay on and provide information for six to nine months, said Matassa.  “We’re looking at where they’re going and what they’re doing out there,” he said. The tags, which weigh around 110 grams, will be dropped when the animal molts its fur, which occurs every year in the fall and winter months.

“I usually err on the side of trying to collect a lot of data in a shorter period of time when you’re dealing with rehab animals,” said DiGiovanni, executive director at Riverhead Foundation for Marine Research and Preservation in Long Island, N.Y. “We’ve looked at the animal who’s been out there 30 days and we feel that it’s been doing what those guys should be doing.”

Data from the two types of tags, known as Spot and Splash tags, won’t answer why the mass starvation occurred, but it will help unravel answer other questions investigators will have, said DiGiovanni, who’s worked with Matassa before and is donating his time to analyze the data. The tags were paid for by NOAA, which declared the epidemic an “unusual mortality event,” allowing for the release of federal research funding.

The number of rescues of underweight six- to eight-month-old sea lions has slowed dramatically in the last two weeks with only three recent rescues, said Hunter.  The center has also stopped rescuing beached sea lion pups that display enough strength to run from rescuers, taking only the extremely weak and underweight. The PMMC, which is a rescue facility and not a research institution, is still at capacity, tending to 151 near-death patients.

One of the causes being investigated for the starvation epidemic, according to the National Marine Fisheries division of NOAA, is the lack of upwelling of deep, colder ocean water, which also carries more fish to the surface, making them easier hunting by sea lions.