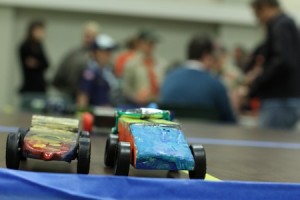 Garbed in uniforms made of blue shorts and shirts and tied off with yellow kerchiefs, topped with blue caps, a pack of cub scouts encircled an assembled race track running from one end of the room to the other, swarming the finish line, whooping and hollering all the way.

To enter the race, scouts present their cars at a weigh-in station. No car can be more than five ounces. From there, the cars are “impounded” so as to deter any further modifications before the race. The impound yard fills with wheeled wonders of varying hue, decorations ranging from racing stripes to flames to a troll doll riding the car like a skateboard.

“It’ll come down to which wheels roll the best and who is closest to weighing five ounces,” says parent Clay Leeds. 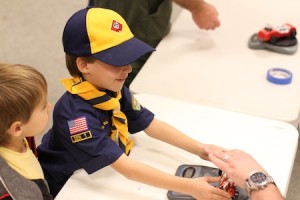 The cars race in heats based on scout packs, which differ based on school grade. Tigers are first graders, wolves second, bears third, and webelos fourth and fifth.

“It’s one of my favorites,” wolf pack member Misha Franc says about the activity. Of course, Misha also counts fishing, BB guns, slingshots, camping, and kayaking among his other favorite pack activities. Most of all, he says, “I like to play, and I like to fish.”

According to Michael Franc, Misha’s father and den leader, that is the point of the scouts. “I want to pass on a love of the outdoors, an appreciation for camping,” he says.

Franc was once a scout too, or something like it while growing up in Czechoslovakia. But the long tradition in his native land was upended when the Nazis invaded during the second World War and scouting was made illegal. 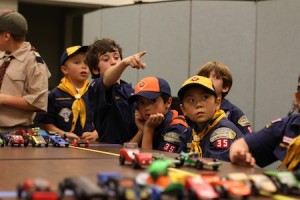 “Czech scouts helped the resistance,” Franc says. “Many ended up in concentration camps.”

After the war, scouting was made legal, but once again, upon the Soviet invasion, the practice was outlawed. That was when Franc and his fellow scouts had to meet in basements. They maintained the tradition, but did so clandestinely. When communism failed, scouting became legal as it remains today.

The weekend after the pinewood derby, the scouts camped at the Boy Scout camp on Oso Lake, near Rancho Santa Margarita. Next up for Misha’s den is a trip to the radio station to learn about the community.

As for who won the races, says Leeds, “We didn’t really keep track of winners per se…We all won!”