A new teen center for high-schoolers-only is being planned by St. Mary’s Episcopal Church and the Boys and Girls Club but some parents feel teens have been left out in the cold.

The impetus for the new center stems from the growing number of 13- to 18-year-olds joining activities at the current teen center in the Boys and Girls Club’s Laguna Canyon facility, said Executive Director Pam Estes. Participating teens, she said, nearly doubled over the past year from 24 a month to 43.

The probable building, the parish hall behind St. Mary’s church at 428 Park Ave., will help allay the stigma older teens feel towards a center associated with afterschool programs for younger kids.  Another factor for a separate center, Estes said, is that older teens want more age-appropriate activities.

Which is where parents say teens could already be included.  “If the city and the school know about the Boys and Girls Club going forward with this, and I’m sure they do, they certainly haven’t made it public,” said parent Tammy Keces, an educational consultant and former school board candidate. “They’ve been doing it behind closed doors. They have moved forward without consulting with teens in Laguna and inviting parental input.”

But input, says the club, is on the way.  Although paperwork has yet to be signed, the club has been discussing the new center for about a year and plans to open it in late August, said Jasa Laliberte, the club’s 25-year-old director of operations. Laliberte said the club plans on including high-schoolers by listening to their needs and then working with students in conceiving ideas for the center as well as implementing them.

“We’re going to convert the teen center now at the club to a ‘tween center for sixth, seventh and eighth-graders for their kind of in-between time,” she explained, “and that will allow the high school teens, who are a little bit more mature, to have their own space, be separate and have their own club.” 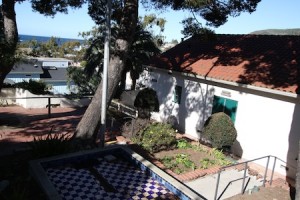 During a meeting between the City Council and the school board last month, board member Betsy Jenkins introduced the topic of a new teen center and affirmed the stigma associated with the Boys and Girls Club among high-schoolers, saying that teens are trying to establish more mature identities no longer associated with childhood.

Laliberte said her research will include face-time with high-schoolers.  “We’re trying to get their buy-in by having them help us create it and plan for it and tell us what they need,” she said.  “We’re talking about planning focus groups or going to the high school and talking to them and doing surveys and research in that way.”

Teens, she said, are a high-intensity group with highly kinetic schedules.  “They already have so much going on that by the time they get here,” she said, “they’re exhausted and just want to hang out.  We want to give them a place they can do that so they’re not just at home by themselves or wandering.”  She said initial ideas include music and dancing, some video games, late-night movies and specialty clubs like cooking and outdoor activities.

St. Mary’s Rector Elizabeth Rechter sees a teen center at her church as a more positive solution than anything the city has offered so far.  “We’re aware that a lot of teens are saying, ‘There’s nowhere for us to be’ and, so far, the city’s support has been to give them a curfew and then the Social Host Ordinance,” she said.  “These are the messages we are giving.  We want a positive message.”

Rechter predicts the center will succeed because the parish hall is within walking distance of the high school and will be operated by a group already working with kids.  “It was a serendipitous event that the Boys and Girls Club was doing the same thing at the same time, looking around for a place,” she said.

Estes also said it was serendipitous.  “One of our main concerns has been the location of the teen center, both in terms of accessibility and impact on our budget,” she said.

The club’s current $2 million budget is approximately one-third fee-based.  “That means we need to fundraise about $1.5 million to maintain current quality and breadth of programs,” Estes said, estimating staffing and ancillary expenses at the new teen center of $250,000.

The biggest challenge will be finding ways to draw in high-schoolers, with many already having wheels to get them wherever they want to go, Laliberte said.  “By the time they’re in high school,” she said, “their parents can’t tell them to come to our club.”

Sophomore Willem Vanderveen thinks a center just for teens is a great idea. “It will give kids things to do so that they don’t resort to things like drugs and drinking,” Willem said.

His dad, the father of two high-school sons, isn’t so sure. “The city comes up with big ideas when they’re talking to each other in some boardroom someplace,” said David Vanderveen, owner of an energy drink company that conducts market research with teens.  “They do no research, they do no efficacy studies.

Retired teacher and former school board candidate Dee Perry noted that in Ireland, coffee houses host teen nights for singing, musical performances and poetry reading. “We have fabulous kids here who are very bright, very creative with wonderful ideas,” Perry said.  “They would have ideas about what would work for a teen center for them.”