Closed Haggen grocery stores in Laguna Beach and Carlsbad remain in limbo this week, while a bankruptcy court approved the sale of six other locations to Gelson’s Markets and 28 more to Smart & Final LLC.

An objection to the sale of the Laguna Beach and Carlsbad stores was submitted by the landlord to the bankruptcy court in Delaware, Rob McDougall, Gelson’s president and chief executive, said in a statement issued Monday.

“Gelson’s awaits the outcome of a future court decision, which may take several weeks,” he said. McDougall declined to specify the nature of the objections.

Despite the existence of an established Gelson’s store in Monarch Beach, located just three miles from the former Haggen store it intends to occupy, McDougall said the company intends to operate both, “if the opposition posed by the landlord is settled.” He said a date for re-opening the Laguna store will be set once the landlord’s objections are resolved.

A conflicting statement was issued Friday, Nov. 13, following a hearing in bankruptcy court in Wilmington, Del. In that, Haggen says the court approved the sale of eight store locations in California to Gelson’s for $38 million. Smart & Final bid $56 million under a separate agreement, Haggen said. In addition, the company said it had accepted bids for another 55 stores in California, Oregon, Nevada and Washington, which will be considered at a hearing next week.

Court records filed on Friday, Nov. 13, show that at least one other objection was raised 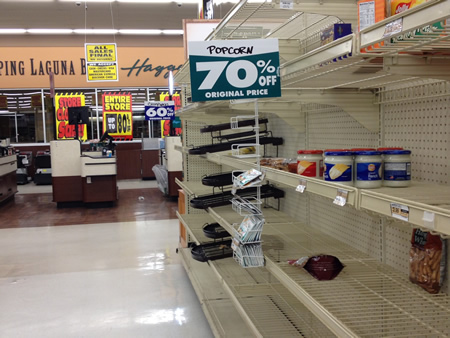 The Gelson’s agreement approved by Judge Kevin Gross requires that contracts be transferred and remain in full force for the benefit and burden of the buyer.

The Haggen store, one of four groceries in Laguna Beach, anchors the Aliso Creek Shopping Center and is owned by the real estate investment trust Spirit Realty Capital Inc., based in Scottsdale, Ariz.

Executives could not be reached at Spirit, which owns 2,600 properties in 49 states. Haggen is one of Spirit’s top tenants, with 20 properties paying $1.4 million in monthly rent and generating 2.4 percent of company revenue, a securities filing says. Haggen solicited bids based on its rent, which has hampered the bidding process for some stores, the Spirit filing says, which may provide a clue as to what is hanging up the deal.

The owners of the remaining stores in the Aliso Creek Shopping center, managed by Shelter Bay Retail Group, of Mill Valley, “are not objecting to anything. We think Gelson’s would be a great addition,” said Steve Robertson, Shelter Bay’s top executive.

Prior to the Haggen takeover earlier this year, the Laguna market stocked groceries under a succession of supermarket chains, most recently Albertson’s, but previously defunct Lucky’s and Alpha Beta.

“We’re excited to become part of these communities, a process that may take time in order to customize stores for each neighborhood,” said McDougall. “Our goal is to retain as many local Haggen workers as possible while also giving opportunities to existing Gelson’s employees, as well as others who wish to join the Gelson’s family.”

Haggen filed for Chapter 11 bankruptcy on Sept. 8. Gelson’s was selected as a bidder in October and anticipates closing on the stores late this year. Gelson’s plans to relaunch its purchased stores early next year under its own brand with initial improvements to product selection and merchandising, followed several months later by redesign and construction. In addition to the newly acquired locations, Gelson’s is on track to open new stores in Rancho Mission Viejo and Manhattan Beach.

Festival of Arts Fine Art Show, Pageant of the Masters set for return in July