Steve Zepezauer: The Voice Inside My Head

I remember when desktop publishing was invented in the mid 80s. Within a few years, anyone armed with a Mac Plus and PageMaker suddenly became an art director. Unfortunately for true graphic designers a new generation of untrained — and often unskilled — “designers” was born. A similar phenomenon occurred with the advent of the Internet and blogging. Suddenly, everyone was a writer.

Or even worse, a “journalist.”

Maybe my dad was more brilliant than I ever gave him credit for being, or maybe he was a futurist, but he was never angrier with me than on the day I changed my college major from computer engineering to journalism. “Be an engineer,” he said. “Get a good job and don’t waste your time with journalism.

But it was magazines that infatuated me. Newsstands, most of which don’t exist anymore, were a magical escape. One could get lost in almost any subject matter and the tangibility of the pages and the smell of ink on paper was splendiferous.

Flash forward about 20 years. After happily toiling away at a few notable publishing companies and having worked on numerous magazines, I was on my own, producing custom magazines for a variety of clients. I shared an office space with my friend and colleague, Ben Warner. We had a tiny 300-square-foot space on Forest Avenue that comfortably fit about two and a half people at any one time. It was the kind of close confines that was perfect for brainstorming and sharing favorite Seinfeld anecdotes. If we had to have a “company” meeting, we would get a table for five at Zinc. We were small but we did good work. Working in Laguna, we were inspired both creatively and industriously.

But something was missing. 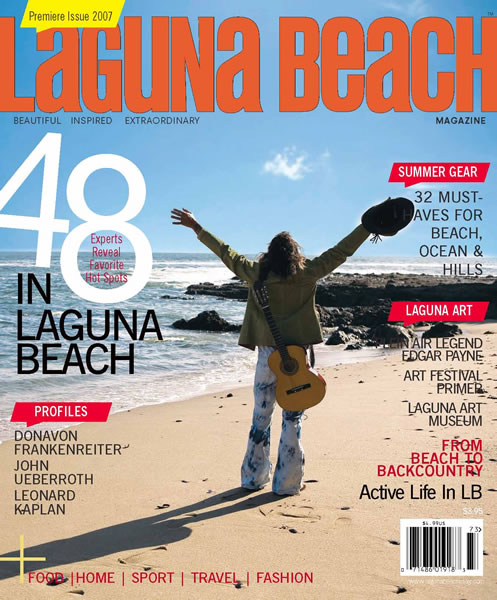 City and regional magazines have always been popular. I’m a magazine hoarder myself, and I always had dozens of publications, many of which were city magazines, stacked in any available space. Back then, it felt as though these city magazines strewn about my office were teasing me in some way: Portland, Park City, Pacific Beach, Marin, Santa Barbara, etc. They were cool places and most of the publications were well done.

So why wasn’t there a Laguna Beach Magazine? It seems obvious now. There it was, all along, right underfoot — copious amounts of inspiration right out my second-floor window. Once this realization sunk in, the thought “Let’s start Laguna Beach Magazine” became action and in less than 90 days, the first issue came out. That was in 2007.

Our 50th issue, which hit the streets on November 21, marks a significant milestone for us. Laguna Beach Magazine has become a mainstay in town and beyond. We remain driven by our passion to tell the unique stories of this place, its people and establishments.

I will die largely ignorant to the profession of computer engineering, but my destiny was inextricably bound to words and pictures — and Laguna Beach. I’m glad I changed my major that day. And, in the end, my dad did not stay angry for very long. I’ve somehow managed to turn this magnificent triviality of magazines in to a decent career. What a perfect waste of time.