A young, slim redhead folds towels in a laundromat amid huge washers and dryers, greenish neon lighting, a rickety folding table and a bedraggled man who looks homeless. As she prissily brushes off specs of lint, she frowns at the fat, wheezing geezer lurking in the corner. And then, horrors, she discovers a sock has gone missing.

So begins the story of “The Sock Thief,” a charming animated short film produced by 13 Laguna College of Art and Design students enrolled this summer in a stop motion animation master class.

Like all her surroundings and animated companions, the redhead doing laundry is fabricated in a college animation studio. In the stop-motion process, characters, including faces and body parts or objects, are manipulated and photographed at high speeds of 24 frames a second, thus creating an illusion of motion, LCAD’s animation chair David Kuhn explained last Saturday during a special screening.

Ranging in age from 19 to 32, the students had been elevating their animation and production skills guided by veteran animator Stephen Chiodo. His credits include “Killer Klowns from Outer Space,” and segments of “The Simpsons,” as well as Tim Burton’s “Vincent.”

“Ever since I saw King Kong, I knew I wanted to create those kinds of special effects,” said the Brooklyn-born Chiodo.  As it was, the short film, screened for college trustees and invited guests, had undergone its final mixing just the night before, remarked Kuhn.

“The project took teamwork, communication and willingness to endure 12 hour days and crunch periods of more than 60 hours a week,” he said.

The final story line resulted from a vote by students over which of their pitches to produce and recalls elements of “Alice in Wonderland,” “Wizard of Oz” and “Shrek,” animated clips that inhabit the world of contemporary children.

A studio tour revealed how every character and the tiniest set details had been built by hand from found objects. Dryer lint featured heavily, creating lunar looking landscapes littered with seemingly familiar objects such as pencils, PVC pipe and the flotsam of daily life. Derek Roberts and Meredith Burgess oversaw set construction. The girl alone, dubbed “Alice in Laundryland”, took an entire illustration file of facial expression and parts built from clay and liquid latex, wire and parts that looked as if snagged from a mechanic’s workbench. The figures could neither be too small or too large and had to move realistically, explained Samantha Cadier, head of puppet fabrication.

Accompanying music was composed by James McKee Smith, conducted by Edward Peterson and performed by the Laguna Concert Band. Rehearsals and recording took roughly seven weeks, said Smith. The film’s soundtrack was a result of a proposed collaboration between LCAD’s animation students and the Concert Band, which received the backing of a $5,000 Seven-Degrees grant earlier this year.

Now, the collaborators and students plan to submit their film to national and international film festivals. 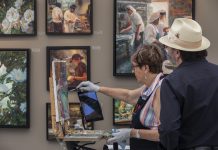