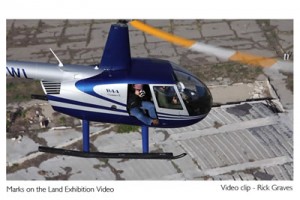 For relics and ruins steeped in ancient history, Southern California comes up short compared to Athens or Rome. Even so, judging from the current exhibition at the less than year old gallery in Irvine’s Great Park, the crumbling Marine Corps Air Station upon which the park slowly unfolds yields creative fodder for historically minded local artists.

The latest exhibition, titled “Marks on the Land: The View from Here,” features aerial photographs by Tom Lamb. Traveling by helicopter, he photographed the airbase’s abandoned buildings and scarred runways, disappearing adjoining fields and what is left of the former Tustin Marine Corps Air Station.

The results are nothing short of spectacular, photographs that resemble abstract expressionist paintings rather than the overhead images one has come to expect thanks to Google street maps.

Curated by Henry Korn, exhibition curator and program director for arts, culture and heritage, the show reflects a Great Park ambition to foster art that is visually and conceptually related to the park and its mission as the cultural and recreational destination of Orange County. “Since the gallery is part of the transformation of the Great Park, we are focusing on exhibitions of works by artists who are engaged with the site and the area that surrounds it,” he explained.

Lamb is the third Laguna Beach artist invited to exhibit his work at the gallery. Designers recently have rolled up the Legacy Project’s “The Greatest Picture,” an outsized photograph produced by turning an airplane hangar into a giant pinhole camera. Photographer Mark Chamberlain, owner of the Laguna gallery BC Space, led the project. 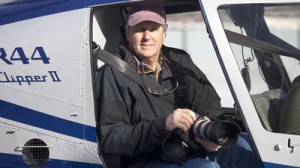 “When you have a 150-year-old artist colony at your doorstep, you don’t have to reach far for artists,” quipped Korn.

Widely traveled and versatile, Lamb describes himself in this context as an abstract expressionist photographer, a genre he first discovered as a graduate student at the Rhode Island School of Design and while assisting Aaron Siskind, a well-known abstract photographer. But, while Siskind achieved abstraction via close-ups, Lamb appears to take the long view. Shooting from varying heights, larger marks on the landscape like tire tracks or tractor grooves offer a visual leitmotif while smaller shapes, sometimes a mere speck of color, provide a sense of proportion and additional visual stimuli.

An aerial image of running field sprinklers recalls Sufi dancers and thoughts on motion and grace and, human ingenuity. Lamb shoots with digital cameras and save for shifting or straightening a line foregoes computer alterations. “It’s all dependent on good planning, the right light and working with skilled pilots who know how I shoot,” he said.

A photograph titled “Baud Landscape” appears as the epitome of abstraction, more like a lush piece of fabric rather than plowed ground. Given its multiple metalic hues, a viewer might suspect chemical pollutants.

“Traction” brings to mind art made by indigenous people of Africa or Australia or runes and tracks attributed to alien explorers.

Visual impact intensifies throughout the exhibit due to its design by Laguna Beach gallerist Peter Blake, who visually groups works just enough to help viewers sort out their own impressions. “Tom chose the photographs but I came in to create a dialog between the work and the space,” he said.

Besides traveling and working on commission for various clients, Lamb lives and maintains a studio in Laguna and exhibits his work at the Pure Laguna Beach Gallery. He is a longtime Festival of Arts’ exhibitor and board member.