As a 20-year-old, Troy Lee fortuitously combined his zeal for motocross racing and passion for art by painting helmets for friends. Trail grit must fleck his DNA; both his father and grandfather raced.

For three decades, the Laguna Beach resident has been fine tuning those interests into a namesake product line that includes helmets, gear and casual wear for motocross riders and mountain bikers. “It’s my lifestyle,” said the company’s owner, who recently opened a sleekly designed store in Laguna Beach.

Troy Lee Designs, at 380 Glenneyre St., is as much a paean to the sports it caters to as it is a retail space. Of course, Lee is not alone in developing a retail concept that caters to the community’s biking aficionados. Laguna Beach Cyclery long ago beat Lee to the starting line, followed recently by Europapi Motorcycle Street Wear.

Nevertheless, Lee’s shop drew quite a crowd during the Sept. 1 Art Walk and has generated a lot of buzz ever since. 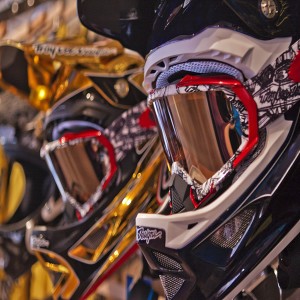 But the Laguna boutique is where the company really tries to tell its story, according to Armando Marron (aka Mondo), Troy Lee Design’s creative director of apparel. He described it as “a great brand experience” for customers who walk in the door “because they see the world of Troy Lee.” What’s more, he’s said it’s a “total guy shop,” offering them all kinds of eye candy from fashion and helmets to history.

That’s certainly how it affected motorcycle enthusiasts Scott and Pam Borsheim. The Silverado couple, visiting to celebrate their anniversary, found Troy Lee Designs by chance when a sales woman at a woman’s boutique recommended it as a good shopping spot for guys. Pam was actually just as interested as her husband.

Scott Borsheim admired the “cool” décor that includes vintage motorbikes, old photos of biking icons and Steve McQueen memorabilia. Indeed, the Laguna boutique displays various pieces from the museum collection that will rotate throughout the year.

“We’ll ride some old motorcycles down here,” Borsheim said, already planning to return with some of his buddies. “That’s what’s been happening,” agreed Mondo, who said people have been wandering in, enjoying the vibe and promising to come back with friends. And that’s what the owner hopes.

Eventually the shop plans to host ride days for both motorcycles and mountain bikes.

The space is simultaneously spare and inviting. Despite the “eye candy,” its floor space is uncrowded. Iconic paraphernalia lends authenticity to the apparel and gear, exhibiting substance and style in equal measure.

“This whole company is Troy’s vision,” said Leigh Donovan, who manages the Laguna and the Costa Mesa boutiques.

Lee started his designs in 1981 and has been passionately involved ever since. He remains the overall creative director, though he pays particular attention to art, helmets and gear while Mondo’s realm is street fashion. While Troy Lee helmets are certified, the owner said designs often involve making the products safer from ideas generated while he and his friends are out on the trails.

According to Donovan, about three quarters of the merchandise is designed under their own label, with about 25 percent of inventory from other reputable brands, such as POC mountain bike helmets, Bill Lavin Leather Island belts, Stitches jeans for men, Barbour leather jackets and Red Wing boots/shoes, among others. Troy Lee also collaborates with Skullcandy ear phones, Oakley goggles and sunglasses and ODI mountain bike grips.

While the company caters equally to motorcyclists and mountain bikers, the Laguna boutique leans more toward mountain biking apparel and accessories because of the sport’s popularity locally, said Donovan.

It is no coincidence that Lee and Mondo, as well as a few other employees live in Laguna Beach. “It’s nice to stay home” and not have to commute to Corona every day said Lee, who has four kids.

This way, he can have lunch with his wife, or maybe go mountain biking or surfing during a free moment. “Laguna has so much inspiration for me,” he said. So when he saw an opportunity to open a store here, he “couldn’t not do it.”

Mondo said that the atmosphere at TLD is fun and inspiring. “You can’t help but love bikes and do projects.” That makes sense since, when asked about his aspirations for the new boutique, Lee replied that he just wants to “make sure it puts a smile on our faces.”