By Timothy Hessen, Special to the Independent

When the Sawdust Art Festival held its latest preview night, Laguna Beach residents lined up in excitement to see what the festival had in store for them this summer. The night and morning before the doors opened, carpenter Beak Davis was still hard at work behind the scenes, finishing the construction of many of the festival’s art booths.

“I was at the festival grounds until 6 a.m.,” Davis told the Independent. “People were already starting to line up outside and I was just working.”

A Laguna Beach resident, Davis has built booths for artists at the Sawdust Art Festival since 1997. Exhibiting artists come to Beak with ideas on how they would like their art booths to be designed, and he makes it happen. Davis enjoys contributing to the festival’s sense of community.

“When you’ve done it for 25 years, you get to know people and you become friends with everyone so it just feels like a big family,” Davis said.

Every booth at the Sawdust Art Festival is different and tailored to the work of the artist, and Davis has been responsible for building some very unique booths, such as the booths for artists September McGee and Nansea Williams.

McGee’s booth, one that sells and displays her paintings, is built with a triangular column in the middle that gives her booth extra wall space for her art. “He really did a great job,” McGee said.

Nansea Williams’ booth is titled “Laguna Sunshine,” and Davis describes it as a festival “hidden treasure.” The booth is four stories high, making it the largest booth at the festival.  Davis said he had to be resourceful in using reclaimed materials once destined for the landfill to build “Laguna Sunshine.”

“I found these pieces of stained glass that somebody had thrown out, and I was able to use them as windows for Nansea’s booth,” Davis said.

The stained glass windows are on the booth’s highest floor, and during the festival, children will sometimes go up the booth and look down at their parents and the rest of the festival through the windows.

After being such an important part of the Sawdust Art Festival through the years, Davis sees art as an integral part of the Laguna Beach community.

“I think from the festival’s inception, this place has been an artist community,” Davis said. “Since they have interactive stuff for kids like different crafts and activities, I think it inspires a lot of them to be creative and grow up and start doing their own thing.”

This summer’s festival is home to about 165 artists and their work, and will run through Aug. 28. This will be the second year back for the Sawdust Art Festival after the 2020 festival was canceled because of COVID-19.

“It was tough for everyone because a lot of people rely on the show as their main source of income and as a social outlet,” Davis said. “The first year back, last year, there was a lot of pent-up demand for that outlet and so it was a good year for the festival and I think this year will be the same.”

At the end of the festival season, Davis will once again deconstruct his latest masterpieces. Their parts will go back into storage until the 2023 season. 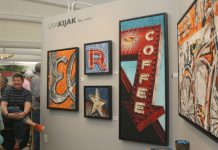