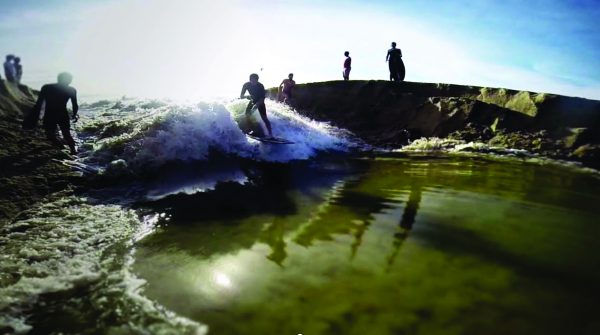 San Diego Regional Water Quality Control Board issues investigative order to the County regarding the continued breach of the sand dune by skimboarders.

Last week, after environmentalists urged the California Coastal Commission and the San Diego Regional Water Quality Control Board to support their request for enforcement to protect the Aliso Creek sand bar berm, the SDWB issued an investigative order to Orange County Parks and Orange County Environmental Resources regarding the breach.

The berm, which separates outflow discharge from Aliso Creek and also the sea, is sometimes breached by skimboarders who dig out the mouth of the creek to create standing waves, videos of which are gaining popularity on social media channels.

Surfrider Foundation California Policy Manager Jennifer Savage said that as a public resource protected under the California Coastal Act and other local, state and federal laws, “the breaching of Aliso Creek’s sand dune alters coastal habitat and may introduce bacterial pollution into the marine environment.”

The Laguna Beach State Marine Conservation Area is adjacent to Aliso Beach and directly impacted by runoff events from Aliso Creek. The SMCA’s prohibited uses state that “it is unlawful to injure, damage, take, or possess any living, geological, or cultural marine resource” Savage said, unless authorized by the California Department of Fish and Wildlife.

The breaching of the berm, which has been an issue for many decades, is also dangerous. While OC lifeguards are aided by OC Parks rangers and Laguna Beach Police Department Beach Patrol in monitoring the berm, when the creek is full, it creates a river with high velocity that forms a huge rip current and three-to four-foot rapids. Nearly 70 percent of OC Lifeguard rescues at Aliso Beach come from the area where the berm meets the ocean.

Also, according to Michael Beanan, co-founder of the Laguna Bluebelt Coalition, an ocean advocacy group dedicated to protecting Laguna’s state-declared Marine Protected Area, while the public is warned of the danger by signage posted at the beach, when members of the public “illegally dig out the beach sand berm, they release over 2.4 million gallons of polluted urban runoff directly into the surf zone. The polluted urban runoff comes from inland over-irrigation, automobile contaminates, herbicides, etc. Aliso Creek is listed as a Federally Impaired Waterbody for bacteria, phosphorous, nitrogen and toxicity,” he said. “The contaminated urban runoff plume migrates up and down the surf zone to threaten the health of unsuspecting families and beach visitors enjoying the waves. When the berm is breached it is not possible to safely visit northern beaches so everyone must crowd together during COVID on half of the available remaining beach. Those willing to cross the flowing creek must risk infections or being swept to sea.”

Enforcement, it seems, is part of the problem. According to Beanan, the city of Laguna Beach is a co-permittee on the MS4 Permit regulating the watershed discharges to the ocean and Laguna Beach police patrol the Aliso Beach parking lot, issuing parking tickets and dog violations, “but refuse to ticket individuals violating the posted regulations protecting the beach sand berm … I cannot understand why the City is unwilling to protect us and visitors from careless acts destroying Aliso’s natural beach sand berm and, knowingly, polluting Laguna’s ocean waters.”

Coastal zone management oversight and implementation has been designated to the state through the federal Coastal Zone Management Act, and the state California Coastal Commission in turn designates management to local authorities, if and when possible. The City of Laguna Beach claims the County is in charge of ticketing offenders, although according to Beanan, the City “can use ‘mutual assistance’ relationships similar to when we have wildfires to enforce basic protection of ocean water…and us.”

In the investigative order filed Dec. 31, the SDWB said that the creek discharges that result from beach users breaching the sand bar berm also reportedly render the beach temporarily inaccessible due to the strong force of the released water flow and waves created while the discharge dissipates into the surf zone. “The absence of any regulatory oversight or monitoring of the creek discharge quality when the sand bar berm is breached by the public has also been raised as an issue in the citizen complaints,” the order said. “This lack of oversight and monitoring appears to be inconsistent with the public health and safety, environmental protection, and monitoring measures implemented during the authorized sand bar berm maintenance activities periodically conducted by OC Parks.”

During a site visit to Aliso Beach on Sept. 17, 2020, the SDWB did observe several actions taken by OC Parks and the City of Laguna Beach to protect public health, such as prohibiting access to the children’s play structure, providing signage to wear masks to protect public health against COVID-19, and enforcement by OC Lifeguards informing those without masks that wearing a mask while at the beach is required. But similar enforcement of public health protective measures “does not appear to be taken with respect to the creek discharges caused by the public breaching of the sand bar berm” the order said. For example, a recent email from Susan Brodeur, Senior Coastal Engineer with OC Parks reported that, “Based on current policy, OC Park Rangers or OC Lifeguards are not empowered to issue citations on any OCCO’s, based on current policy.”

In the time since the SDWB visited Aliso Beach in September, it has received three notifications from the public with photo documentation of beach users digging out the sand bar berm and releasing a high flow volume containing unknown levels of pollutants from Aliso Creek estuary onto the beach and into the surf zone.

By March 1, the County has been directed to submit a report that includes, among other items, an explanation addressing whether the public breaches of the sand berm are subject to Orange county’s enforcement, information regarding evaluations of public health risks associated the berm breaches, and any documentation to support the county’s conclusion “that little correlation has been found between creek discharges during berm openings and an increased risk of exposure to bacteria.”

Marisa O’Neil, a spokeswoman for OC Parks, said the investigative order from the SDWB  “requests the County of Orange to submit technical information addressing the Aliso Creek mouth discharges resulting from the public’s breaching of the sand bar berm. OC Public Works and OC Parks are collecting the information that is being requested.”

David Gibson, the executive officer of the San Diego Regional Water Quality Control Board who issued the investigative order, said the board will consider the results of the investigation to decide what regulatory course to take.