Holly Parker’s save at the buzzer preserved Laguna’s 9-8 victory over Newport Harbor on Tuesday, Dec. 23 at the Laguna Community Pool. Breakers had leads of 3-1, 7-4, and 8-6, but could not pull away from the Sailors who tied the contest at 8-8 with just 1:32 remaining in the game. Makenzie Fischer’s seventh goal with just 23 seconds remaining proved to be the deciding tally capping a wild fourth period.

The contest started slowly with Laguna scoring first building to a 3-1 advantage in the second period before a pair of late scores by Harbor tied the game at 3-3 at the intermission. Breakers dominated the third period but Newport was able to claw their way back to create the final anxious minutes.

Laguna resident and Newport coach Bill Barnett was unable to attend his final game in Laguna against the Breakers and is still recovering from recent surgery. Breakers will still have a few remaining opportunities to face Barnett this season in tournaments and the CIF playoffs. Breakers were missing key starter Aria Fischer who will return to action with the first matches in 2015. The sophomore has been sideline with a bruised knee injured in a fall at school.

Breakers took their fifth straight win over Newport and their 26th match in a row since losing 8-7 to Foothill last January at the undersized Laguna Community Pool. Fortunately for Laguna, all remaining contests this season with top teams will be in full-size pools either away or at neutral sites.

Breakers will return to action on Friday and Saturday, Jan. 2 and 3 at the Newport Holiday Cup featuring all of the top teams. Breakers are defending champions hoping for their fourth straight major in-season tournament title. 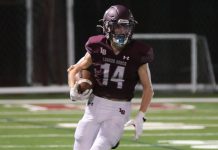 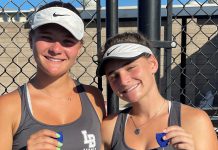