Girls Water Polo – Laguna Girls were at the annual USA Water Polo Junior Olympics held at Stanford and Bay Area pools. The high school girls were on the Set 16’s and 18’s teams while local pre-high school players were on the Laguna Beach teams for 10’s and 12’s and Set 14’s.

Claire Sonne’s squad was composed of key Laguna Beach, Orange Lutheran, and Santa Margarita players. For the Breakers, Princeton-bound Ava Houlahan along with incoming seniors Charlotte Riches and Cleo Washer were in the field while incoming senior, Lauren Schneider was in the cage. Ava Knepper was absent due to her training with the Youth National Team for an August tournament in Belgrade. Set 18-Black went 6-2 for the week losing 7-6 to Newport on July 23 at Palo Alto High School and again in the finals 9-7. The Newport Harbor squad capped a season where they won CIF, State Regionals and now the Junior Olympics. Laguna Beach was the only high school team to beat the Sailors last season.

The remaining upper class Laguna Beach High School players were on the Set 18 Grey squad (7-2) that finished 13th after a satisfying win over CHAWP (Chino Hills) 13-12 at Amador Valley High School in Pleasanton.

Girls Volleyball – Coach Sinan Tinek’s squad is completing their summer schedule on Aug. 6 and 7 in the Queens Court Tournament hosted by Foothill and played at the Momentous Sports Center in Irvine. All three levels will be competing in this event. JV will be playing at Clava Sports Center in Irvine. Schedules and Results: check fhsqueenscourt.com. Laguna was 18-16 last season, finished second in the Sunset Surf League and lost in the Division 2 CIF quarterfinals to eventual champion Aliso Niguel in a five-set thriller.

Alumni Notes: Congratulations for the two-time Collegiate Women’s Water Polo MVP, Makenzie Fischer ‘15, for receiving an NCAA Post-Graduate Scholarship. The Stanford graduate will use the award to complete her masters in Mechanical Engineering.

Go to the department website at lbhs.lbusd.org/athletics/teams for the updated schedules and where the scores get posted first for all levels!

Little League Memorabilia – The Laguna Beach Historical Society is looking to expand their collection on early Laguna Beach Little League history. If you have programs or photos from the 1950s, 1960s, or 1970s please contact Frank Aronoff. 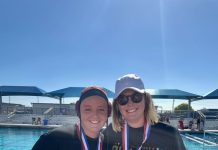