By Andy Hedden, Special to the Independent

The Babb Building, venerably situated on the corner of South Coast Highway and Thalia Street, was erected in 1936. It has been home to many, commercially and residentially.

Buzz about the Babb Building started in its first year in the defunct Laguna South Coast News. The story described the project as “another step in the expansion of Laguna’s fast growing business section and it is felt that the continued development of the residential district in this neighborhood is rapidly promoting a demand for localized stores.”

Flash forward 70 years and that proclamation still rings true, even though the Babb Building is now considered historically significant and was recently listed for $5.3 million.

Thalia Street Surf Shop owners Jim and Pam Cocores not only run the popular retail icon, but live in one of the second floor apartments in the building as well.  They opened for business in July of ’95 as Toes On The Nose, changing the store’s name five years ago to its present moniker.  In 1996 they opened a second at the opposite corner of the building, run by their son Nick. This was after Townsends, known to many as “Virginia’s dress shop” closed its doors after nearly 25 years of business.

“We have a surf museum, not just a store.  The old plank floors, the ceilings, the windows, for what we do (here) there’s nothing better,” Jim Cocores said.  The original corner shop has a decidedly 1960’s flavor, whereas the second shop leans towards the ‘70’s.

But back to 1936.  Tony O. Babb, then a 15 year resident who was living in Three Arch Bay, touted his “unbounded faith in the future of Laguna Beach” in the South Coast News article. Babb was district manager for the Eastman Kodak Company, having charge of all their interests west of Salt Lake City.  A title search of the property reveals that Babb purchased the parcel in September of 1934 for the sum of $10.

Babb hired local contractor Harry Harper, who was also actively building in San Marino at the time, to oversee the project.  Harper would establish a new office in the Babb Building after its completion.  This was a boom time for Laguna.  In a related story in the same edition, the paper reported that new construction that year exceeded the $1 million mark, up some 300 percent from the previous year.

Construction of the Babb Building was completed in a scant five months.  In a follow up June 26, 1936 article, the paper sang the praises of the new “credit to Laguna.”

Quoting from the story, “In this new building, designed to carry out the quaint charm for which Laguna is famous, one will find many new and creative ideas on both the lower floor and upper floor.  The storerooms on the first floor are finished with the latest in windows, interior decorating and hardwood floors.  The apartments of the second floor are doubles and are completely furnished.  They command a wonderful view of the ocean and are remote from the noise on the boulevard.”  The “boulevard” being Coast Boulevard South, later renamed South Coast Highway.

In addition to chief contractor Harry Harper, other local businesses that contributed to the project took out ads that appeared on the same page as the story.  These included Bert the Roofer, located at 653 Thalia Street; Bowles Electric, at 246 Forest Avenue, and Public Mill and Lumber Company operating from 860 Coast Boulevard South.

In the mid 1940’s and 50’s, the building’s most notable occupant was William Mortensen, who ran a photography studio and school.  At the time, Mortensen was dispelled by contemporary luminaries such as Ansel Adams for his unorthodox manipulation of images, which included the liberal use of cosmetics and photo retouching.

Honey Lu Percy, now 83, was one of Mortensen’s earliest subjects.  In 1947, at the age of 25, she was working for a neighboring doctor.  When one of his regular models failed to show for a sitting, Mortensen asked her to fill in, gratis.  He clad her in “a bag of rags” and applied heavy foundation make-up to cover her extensive freckles.

Life time Laguna resident Jack Morse, husband of former City Treasurer Susan Morse, moved into one of the upstairs apartments with his mother and grandmother in 1951.  He was 16 and attended Laguna High.  He has vivid memories living there.  Especially of the Mortensen studio and the Ten to Ten Delicatessen, so named after its hours of operation.  The deli was where Goko’s Café is now.

“It was a little cramped but it was cool ‘cause you could roll out of the place and hit the beach,” he remembers.  He also remembers neighboring businesses. There was a Ford dealership where Frank’s Mercedes is now and on the other corner, where Laguna Automotive is stood a coffee house called Café Frankenstein.  And where Hush now resides there was a small movie house that showed silent films. During this time, Morse worked as a dishwasher at Jolly Rogers. He moved in 1955 when he joined the Army.

T.O. Babb died in 1938, leaving the property to his wife, Gretchen.  She retained ownership until 1956, and then sold the building to Louis and Eva Gauthier for $57,000.  Without reliable reference, the next decade in the building’s odyssey is a little murky. 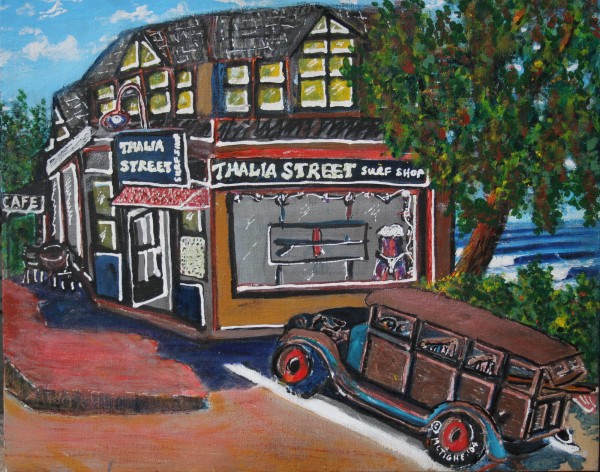 In 1967 the property was purchased by Edward and Virginia Reap.  And yes, that’s Virginia of Virginia’s dress shop, or Townsends at it was formally called.  The dress shop didn’t open until 1971 and was originally more of an antique shop.  She also sold her daughter Patricia’s pottery.  Kathy Jones, the Reap’s other daughter is an accomplished local oil painter and has exhibited in the Festival of Arts for the past nine years.  When Patricia, or “Petey” as friends know her, moved to Seattle, Virginia shifted retail gears.

“It sort of morphed into a dress shop after that,” Kathy Jones recalls.  Virginia, one of the earliest students at Art Center College in Pasadena, majored in fashion design.  “She started with evening wear, then moved into more every day.  She also made these amazing jackets with rich materials and detailed inlaid pockets,” Jones continued.  Virginia also had a flair for jewelry, designing and making bead necklaces from exotic materials.  Her business was so successful that she eventually took over the two southern most storefronts. Virginia died in 1996 and the shops closed less than a year later.

Clearly the Babb Building’s most enduring living legacy is saucy octogenarian Evelyn Reynolds, who has lived there for 26 years.  Originally an employee at Townsends, she has never paid a day’s rent.  “I took care of things,” she stated. This included sweeping the sidewalk out front, cleaning up the shop, sorting and stacking fabrics and serving refreshments at receptions that Virginia would often hold.  She’s still sweeping out front, too, though in her words, “It depends on what party is going on or what holiday it is.”

Reynolds is moving next month one block north into a “small, nice, clean place.”  Thanks to the generosity of Kathy Jones, she will continue to enjoy a rent-free lifestyle.  When asked if she was excited, she answered, “Well yes, but I hate leaving this place (her apartment) looking like hell.  Looks like an earthquake hit it.”

As for the current merchants, one only has to spend a brief time talking with them to get a sense of how close they are, like family.  George Ristaeski, who owns Goko’s with wife Connie, is the longest-term tenant, 14 years.  Connie ran the operation solo for the first year, but business was so good that, “I quit my job,” George quipped.  Will Pennartz, owner of The Surf Gallery is the relatively new kid on the block, having been there nearly six years.  Then of course there’s Thalia Street Surf Shop, anchoring the building at both ends.

The Babb Building recently sold.  As the property is still in escrow, both Jones and the buyers respectfully declined to discuss any financial details or future plans of the 70-year-old mixed-use monument.  The current tenants are optimistic they can remain.

Jim Cocores positively stated, “We all hope we stay.”