By Loreen Berlin, Special to the Independent

The annual January “casting call” brought lots of folks from throughout Orange County to Laguna Beach over the past weekend.

That was to “tryout” for a part in the “Pageant of the Masters,” where many returned for another opportunity to be a star on stage in the Irvine Bowl.

Also, there were first-timers, led by word-of-mouth or accompanied by a friend or family member who had a previous experience participating.

Laguna resident Diane Babcock has volunteered as a Pageant makeup artist for 23 years. This year, she brought her two “Pageant babies” as they are called, when parents have children while volunteering. Tripton, 9, is a third timer and Reidley, 6, was hoping to be cast in his first role.

“The Pageant is awesome; you get to meet a bunch of friends and feel like a professional onstage,” said Tripton. “My mom did my makeup one year; the other year I wore a mask.”

Younger brother Reidley said he’s trying-out because he wants to know what it’s like for himself.

“After high school, I was looking for another place to do stage makeup when I met Joy Trent (deceased), who was the Pageant makeup director,” said Babcock. “That’s how I got started and I’ve been here ever since; it’s part of who I am,” she explained. “I started doing makeup on a Styrofoam head when I was 10 years old.” 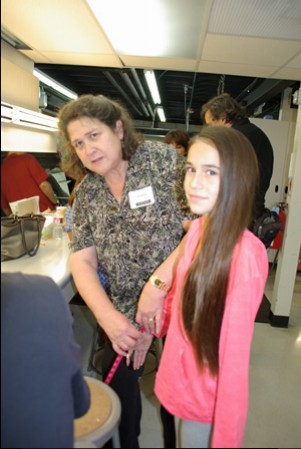 Keilani Norman, 12, and Maty Carlson, 11, attended casting. Maty tried out before but wasn’t cast, while Keilani is back for a second try. Keilani’s first stage appearance was last year in King Henry VIII’s family.

“I’m doing this for the joy of it,” said Keilani. “During my first experience, everyone was so nice; it’s a great program to be onstage portraying another person and to watch the people watching you with binoculars; it’s interesting” she said.

“It’s a great learning experience and it’s great to be part of the art community,” said Keilani’s father Rocco Norman.

Maty’s mother, Melia Carlson, was in the Pageant when she was Maty’s age. “My father was an artist with the Festival of Arts and I was in the Pageant,” Carlson said.
Maty is trying out for the third time but has yet to be cast. “It’s fun and it’s a different experience,” said Maty.

A Laguna mother-daughter duo, Phyllis Schaub and Katie, 16, decided this was “their” year to venture the casting. The Schaub family is new to Laguna and wanted to become involved in the community.

“We attend the Pageant most years, so when we received the e-mail, I said, ‘Katie, let’s go tryout.'”

“I’ve heard from friends who’ve been in the Pageant; and I love being in the spotlight and am fascinated by the Pageant and the artistic elements,” said Katie.

For people who enjoy art, theater and music and like being in the spotlight, this just might be perfect for a volunteer part if you can hold still for 90 seconds.

People of all sizes and ages are needed to be cast members in the presentation of tableaux vivants or “living pictures.”

Pageant volunteers are also needed for positions in the wardrobe, make up, and headdress departments, as well as cast-area coordinators and refreshment servers, amongst other positions.

Students volunteering for the Pageant can earn credit toward community service requirements.

“It takes more than 500 volunteers, both onstage and behind-the-scenes, to put on the Pageant,” Pageant director Diane Challis Davy said. “We wouldn’t have a show without our volunteers and they have so much fun backstage, volunteers return year after year.”

Performances are nightly at 8:30 p.m. from Wednesday, July 9 to Saturday, Aug. 30. This year’s show, “The Art Detective,” is set to showcase a good mystery in the world of art.

Loreen Berlin may be reached at [email protected]