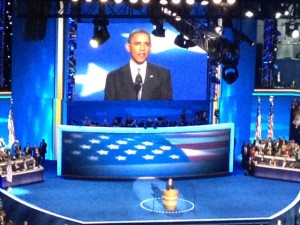 By Madeline Knutson, Special to the Independent

I was not in possession of a credential to enter the arena due to the venue change. The venue had changed because of extreme weather conditions.

However, my luck changed when I received a phone call from extremely kind Michael Ray. He notified me that he had secured me a pass to get into the arena. Thanks to his help, I was able to experience one of the most amazing moments in my lifetime thus far.

The night was filled with emotional moments, from Rep. Gabrielle Giffords reciting the Pledge of Allegiance to Beau Biden nominating his father to be vice president again to President Obama delivering a speech that brought myself and many others to tears.

The “American” feeling in the room was extremely strong, with constant chants of “U.S.A.” and thousands of waving flags.

Love could clearly be felt in the room, too, from Vice President Joseph Biden expressing his love for his wife, Jill, to large “Thank You” signs held up for onstage veterans.

This is one night I will never forget and will appreciate for the rest of my life. I experienced a moment of true American history and I want to thank Michael Ray so much for letting me be a part of this.

And From the Convention Veteran…

Amid the convention’s whirlwind of activities, local Michael Ray made the acquaintance of fellow scribe, Kofi Buahin, a documentarian from England who came to the convention to “discover” America.

A veteran of nine nominating conventions, Ray observed similarities between both Clinton and Obama’s second conventions. “Not as much wow factor. Not as many celebs. Not as much energy.   Clinton was and is a masterful political speaker, yes.  Obama is not as good, no question.  Yet somehow whereas Clinton is a magician, Obama is the real thing. And without the first, the second could not be possible.”

Michael Ray attended the convention as a guest of the National Democratic Institute.