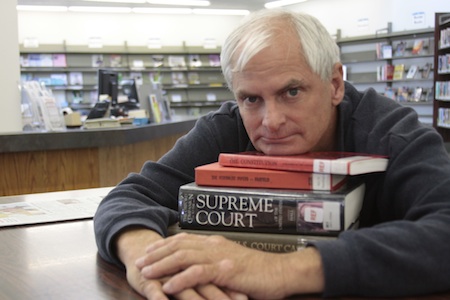 Laguna’s City Attorney Phil Kohn sought to dismiss the suit in its entirety last May.

In a victory of sorts, Carter upheld the claim filed by Porto that challenged the residency requirement to use the homeless shelter in Laguna Canyon, conditionally imposed in 2009.

Filing the suit on his own behalf, Porto, who is self-taught in legal procedure and lived out of his car for three years, sought damages and relief for cruel and unusual treatment and for discrimination against homeless individuals, and invoked infringement on the rights accorded him by the first, eighth and 14th amendments to the U.S. Constitution.

Reached by phone, Porto said Carter’s decision at least partly validated his claim that the city wrongfully denied his access to the shelter based on non-residency status. Asked what’s next, he said “there will be a lot of paperwork going back and forth” as the discovery process gets underway, with each side sharing information and laying out facts to help the judge make a decision, a process he expected to take another six to eight months.

Porto, homeless since 2010, currently resides temporarily in a studio apartment. “It is a fact that I was denied access because I did not meet the residency requirement,” he said. In his claim he said that the city had initiated “local tie requirements” at the shelter and cited language from a staff report saying: “While this approach has not been tested in the courts, it seems reasonable to do so.”

In an answer to Carter’s decision to allow the claim to proceed, the city’s attorney admits that a staff report includes the language Porto cited, but denies his claim that he was prohibited from sleeping at the shelter due to a failure to meet residency requirements.

The referenced staff report was attached to an agenda bill for the Nov. 3, 2009, City Council meeting, ultimately approved, that recommended authorizing the city manager to limit city-funded shelter services for homeless persons with local ties if demand exceeds capacity.