Aaron and Shira Alcouloumre first got involved with Laguna Beach’s day labor center by dropping off day-old bread, their joint b’nai mitzvah project in 2010. The siblings next raised $3,000 to pay for installation of a water fountain at the center, a need the workers identified. And each Christmas since, the teens raised funds to purchase gifts for workers’ kids, delivering presents to garages and apartments shared by several families.

“I have a connection with these guys; I really care about them,” said 16-year-old Aaron.

This summer, the benefactors went a step further. They spent an hour three times a week at the center teaching English at a picnic table. Sometimes friends would accompany them. And despite the dust and constant interruptions of stopping cars, the adult students continued their lessons completing an entire textbook.

“The amount of progress they’ve made is so incredible,” said Aaron, pleased he can converse some with his pupils. “The language barrier is not as significant and it makes a huge difference for them.”

For instance, he said, the worker’s English vocabulary has improved enough that they can ask for a hard hat or a different type of tool on a job, he said.

“Because many of the workers were illiterate even in Spanish, they started with a picture dictionary. Sometimes there would be five guys, and sometimes 25 huddled around the table hanging onto every word,” said Annee Della Donna, the teens’ mother, who was barred by her children from participating and waited for them in the car during classes. 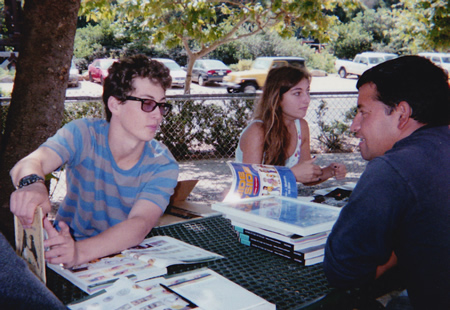 “It was evident they desperately wanted to learn English. Often, workers would show up for a class even when they were not there looking for work,” she said.

“When my kids see one of their guys working in town, they always shout ‘hello’ and are greeted the same,” said Donna.

Aaron, a junior, and Shira, 15, a sophomore, begin their own classes at Laguna Beach High School next week. They finished off their informal session on Tuesday with a graduation ceremony for their pupils. “We wanted to acknowledge the workers’ accomplishments,” Donna said.